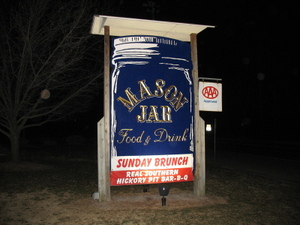 "The jar" is a family-friendly restaurant that seems to specialize in authentic-style BBQ (I say "authentic-style" just so all of you purists won't be offended that I dare call anything "authentic" outside of Memphis, or Texas, or North Carolina, or wherever the hell you're from) and wood-fired brick oven pizza.  Sounds good, right?

The Mason Jar seems to have read my mind just by existing.  One of my dreams has been to open a BBQ place in Bergen County, a brick oven Neapolitan-style pizza place in bergen county, or just a good bar/restaurant in Bergen County.  The Mason Jar seems to try to be all of those things (with varying degrees of success) under one roof (and they add something I didn't think of:  a young and very attractive waitstaff, no doubt courtesy of nearby Ramapo College).

The burger is served on what they call a homemade focaccia. Focaccia brings to mind a thick and dry bread, not really suited for a burger. I was assured by the waitress that it's the "best part", and that it's really just a hamburger bun, albeit a homemade hamburger bun.  She was right.  It's very acceptable, and you can easily pull out the guts if your bun-to-burger ratio too high.

The beef seem freshly ground, and was cooked to perfect med-rare.  I will say that it could use a bit more seasoning in the way of salt and pepper.  Overall, though, it's a very good burger.  Is it as good as the Franklin Steakhouse in Nutley?  Not quite.  Is it big like the burger at Gaffer's in West Orange?  Nah. Much smaller.  But, at about 7-8 ounces, it's an appropriate size.

The fries are steak-fry style, and might very well be from that huge supplier known as Sysco. But, they're done very well, as are the big diner-style onion rings.  I'd be surprised if either are house-made.  A nice pickle spear rounds out the plate.  There's no ridiculous garnish, no out-of-season tomato, no limp and warm piece of lettuce.  That's what i call good-plating.

The BBQ, to my mind, doesn't fare as well.  They're really using smoke, which is essential if you're trying to produce any style of BBQ.  Nbut, I just don't get much smoke, the sauces aren't very spectacular (maybe even from a bottle?), and the meat is a little dry. The ribs were by far the best choice, much better than the smoked pork loin (loin shouldn't be served anywhere), Texas brisket (way too dry), and Carolina pulled pork (it was chopped as well as pulled, which will surely send some purists over the edge). 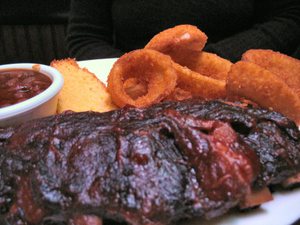 The pizza just depresses me.  I mean, they're sitting on a couple of wood-fired brick ovens (from Italy, they claim, if that matters), and they're producing pizza that's just not that much different than pizza coming from a gas oven at your local Lenny's or Mike's or whomever's.  I ordered a pizza hoping for some nice char indicative of a super-hot oven, and I got something somewhat bland and a bit too "perfect" looking.  When you throw some dough into what should be an 800 degree oven and you put it up near a pile of burning wood it shouldn't come out looking anything near "perfect."  It should look like it just got in a fight with 800 degrees of flame and smoke, with blisters and charred spots and bubbles. This pizza neither looked nor tasted like that.  It's just a bit too "safe" for my liking. And what makes it worse is that it has the unrealized potential to be great. 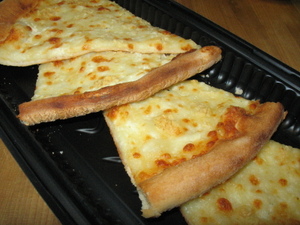 The buffalo wings get an honorable mention for being spicy and crispy, and served with some really good blue cheese dressing. They try to add to the usual Frank's hot sauce recipe with some spice mixture, that i assume is chili powder-based, and adds somewhat of a subtle taco-flavor.  Sounds horrible, but it's not.  There're actually chunks of blue cheese in the dressing.  It would make a wedge of iceberg proud I tell ya.

They've got at least 10 beers on tap and the usual suspects in bottles.  There are a few wines by the glass as well.  What sets their wine service apart from most other places of its ilk is most certainly the size of the glasses:  They're much bigger than what you'd expect.  Big enough for a decent swirl and sniff, if that's your sort of thing.

Lame pizza aside, there are some other problems at "the jar."  The baked beans had an off flavor and weren't very good (the gold standard of baked beans is Fink's baked beans.  Fink used to have a place called Fink's Funky Chicken in River Edge).  The cole slaw was one of the few cole slaws that i've ever met that i didn't like.  and the ribs were a bit too dry. 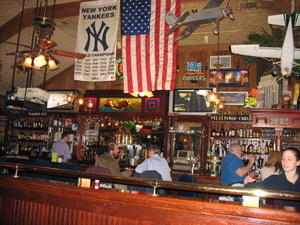 I must admit that my fondness of this place is no doubt influenced by the youngish vibe and the jukebox.  They've got one of those internet-enabled jukes from TouchTunes which is practically always playing something, and it's just loaded up with great music from every decade of my life.  Jane's Addiction, Phish, Death Cab for Cutie, Yes, Weezer, Rush, it's all there.  The burger, the bigger-than-average wine glasses, and that juke box are enough to keep me coming back.  The Galaga/Ms. Pac Man combo machine doesn't hurt, either. 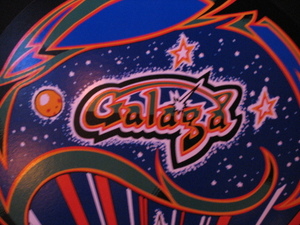