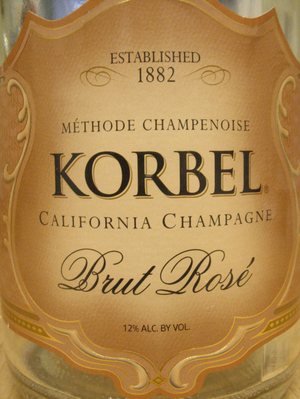 Hey look, say what you want, this stuff is pretty damned drinkable.  Yeah, yeah, I had my doubts, too.

In college, back in the eighties, I was introduced to "champagne."  Specifically, Korbel Brut (which is not champagne, although they somehow manage to call themselves champagne, further adding to the miseducation of Americans, and others, I'd think, probably even including Lauryn Hill).  Korbel was very very fancy.  It was sophisticated.  It was exciting.  It was, perhaps, the first sparkling wine that I'd ever had.  And for those reasons, it will always have a special place in my heart.  But, I don't think I'll ever drink the stuff again.

Legal Sea Foods is a chain, it's in a mall: and it does not suck 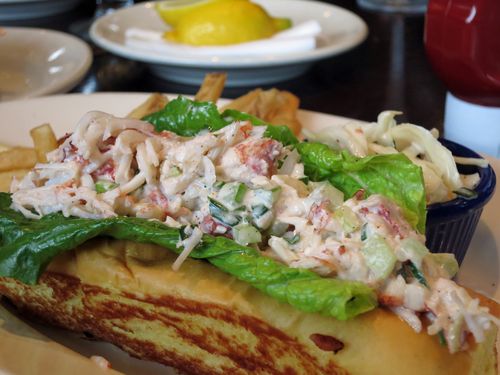 Say all you want about chain restaurants, but you can have a pretty damned good meal at Legal Sea Foods (aka, Legal Seafood, LS).

Let’s face it, the term “chain” is really meaningless.  Of course there are the McDonald’s and Wendy’s of the world, and those are certainly “chains,” but there also chains like Smith & Wollensky’s, Palm Steakhouse, and Legal Sea foods.  And, considering that menus at Legal Sea Foods’ various outposts vary, just as the menus at  Per Se and The French Laundry can be similar, but different, perhaps it’s reasonable to say that there are chains from Thomas Keller or even Ducasse?

OK, so I might be stretching the definition of “chain.”  But, it’s a pointless pejorative that people use when they probably really want to say “fast food.”  Actually, what they really want to say is “restaurants I don’t like (and that i've never tried).”  And quite frankly, most people don’t have very good taste so I don’t listen to what they say anyway.

Back to Legal Sea foods for a moment though.

Continue reading "Legal Sea Foods is a chain, it's in a mall: and it does not suck" »

Several bad burgers: at restaurants, and one good one: at home

I sent my buddy dbrociner to Oceanos in Fair Lawn under the assumption that the burger might be good.  I only thought this because a bartender at Oceanos (Cara/Kara) told me that they had plans to have a really good burger at lunch.  Yeah, it's a Greek fish restaurant, but I thought "just maybe."

dbrociner took a hit for the team, folks, and I think you all should thank him.  You can see his reaction to the burger in the comments in the Oceanos post.

Anyhow, having had a mediocre burger myself this weekend at Janice Bistro in Ho-ho-kus, and, getting the report from dbrociner, I was left with no choice but to make another burger at home.  I'm fed up with crappy burgers!!

Continue reading "Several bad burgers: at restaurants, and one good one: at home" » 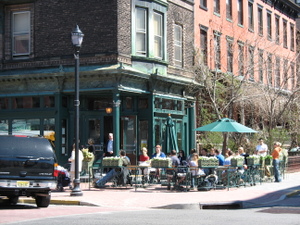 I rolled into Hoboken in about 1986, young, wide-eyed, and sober (when I left I was, of course, old, jaded, and drunk).  That was a long time ago as far as Hoboken's recent history goes.  A lot has changed since 1986.  At first, for the better, then, I suppose, a bit for the worse.   Hoboken went from a somewhat run-down former shipping port, to a vibrant city, filled with artists and musicians and funky bars and restaurants (and more recently into more of a generic mall for young professionals).  A lot of those bars and restaurants were hold-overs from Hoboken's old days.  The Elysian was one of those bars.

The Elysian was presumably named after the Elysian Fields, which used to include the several blocks between the restaurant and the Hudson River.  That field was where the first organized game of baseball was played.  Don't let those people in Cooperstown tell you otherwise.  And for years, it was one of the few old-time bars left in uptown Hoboken.  It was a place where musicians and artists often hung out, along with some old-timers as well.  The crowd was always a bit older than the average post-college crowds at other bars.  Blues bands would often play in the back room.   The drinks were cheap.  The atmosphere was dark and hadn't changed in years.  My kind of place, and a usual stop before and/or after a show at Maxwells.

Much to my surprise, the Elysian went bye-bye.  Even more to my surprise, and somewhat to my dismay, the people who own Amanda's were opening a restaurant in the space.  "Great," I thought, "another upscale restaurant taking the place of a beautiful room that has a lot of history."  Good thing I was wrong.

What the owners of Amanda's did do was keep the room true to its roots.  It's obvious they did a lot of work to the place.  From what I understand, it was utterly and totally ripped apart.  Down to the studs.  But, somehow, the beautiful ceiling and mural paint on the interior wall remain intact.  They've brightened up the place with windows, yet it didn't lose its homey feel.  They totally removed the old bar, refinished it, and put it back in place. The back room still hosts live music and is bright and elegant.  A lot of the detail was left as is (although the nicotine was scraped off the walls and ceiling).  The patrons are still a bit older than 22.  There are even some musicians and artsy-types spending time there.  And it turns out that it's still my pre/post Maxwells show stop.  And, they have what I think is the only french bistro in Hoboken.  This is all a lot better than what could have been.  Of this you are assured.