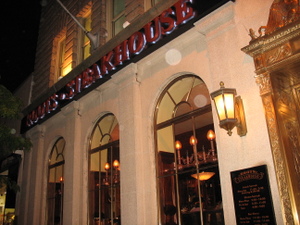 The place was jammin'.  People were lined up waiting for tables.  People were hovering around the bar area waiting to pounce on the first open seat (bar dining is almost always preferable).  There were a lot of suits and moneyed looking people enjoying themselves at the bar and all throughout the three dining rooms.  What a scene I tell ya.  And what were they there for?  Steak and really expensive wine, from what I could tell.

Let me get right to this wine thing.

The wine list is pretty big.  A couple of hundred bottles I'd say.  The vast majority were priced well into 3 digit territory.  Several bottles well over a thousand.  That's all fine and well for a steakhouse, and par for the course, I suppose.  After all, Summit is a well-heeled town with some well-to-do neighboring towns, and when you're spending 36 bucks on a steak I suppose some people don't mind spending 150 on a bottle of wine.

But, I am neither well-to-do, well-heeled, nor am I willing to spend 150 on a bottle of wine just because there aren't many other choices:  I counted maybe 5 reds under 80 dollars.  Maybe 1 or 2 under 50??  Maybe. Please don't quote me on this, as I might be off by a bottle or 2.  But come on Roots, throw me a couple of bones here.  Would it kill you to offer a 50 dollar sangiovese or 2?  A 45 dollar Zinfandel or 3? Something for the common man?

It didn't take long to do the math and figure out that the wine-by-the-glass route was definitely the most cost-effective option.  And at 11-15 dollars a glass, that's saying something.  But, they had a couple of options in two colors and some with bubbles, so overall I was pleased.  I'd say I like their wine-by-the-glass program much better than their overall wine program.  If only because I can actually afford the wine-by-the-glass.

But you're going here for steak, so get over your wine markup issues, m'kay?

They offer a bunch of steaks.  Some are USDA Prime.  Some are not.  Some are dry-aged.  Some are not.  One is dry-aged and Prime.  Others are USDA Choice and not dry-aged.  Or something like that.  This is all maddening.   We all know that you prefer USDA Prime and dry-aged.  I wish they'd offer only that combination, with maybe one or two others for the non-dry-aged crowd.  I will say that the menu pretty much clearly stated what everything was, so long as you assume "Choice" if it doesn't specify "Prime" and "not aged" where it doesn't say "dry-aged".  That's reasonable.  The waiter described all of their steaks, however, as simply broiled with salt and pepper and a little butter.  That's very reasonable.

I skipped the dry-aged sirloin (the only dry-aged option IIRC?), as I'm not a big fan of sirloin, and went with the USDA Prime not-dry-aged porterhouse for two.  For me and the blackeyedpig that is. 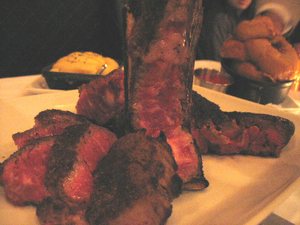 The porterhouse was artfully plated with the bone sticking straight in the air and the filet and strip sides sliced into nice chunks.  This steak was pushing 2 inches thick, which allowed for the formation of a great crust while keeping the inside nice and rare.  They do good crust at Roots.  The butter treatment was ever so slight, and added some nice shininess and mouthfeel.  I actually appreciated that it wasn't floating in butter a la Luger's.   It was cooked perfectly to rare as ordered for the most part.  Overall I thought it was a pretty good piece of meat.  Tender but with a bit of chewy sinew here and there. 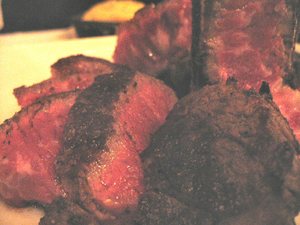 Blackeyedpig requested a tuna tartar that they had on the menu the previous week, even though it wasn't on the menu.  That request was graciously filled.  It was a good amount of tuna for the money (11 dollars maybe?), and pretty much the classic asian preparation with sesame oil, a little salty element, a julienne of root veggies, and some fried wonton wrappers.  Quite good.

Your servers here are older and more professional than you might be used to in the 'burbs.  They wear those classic steak house suit jackets that you see at NY steakhouses, lending a certain air of authority.  They do, however, seem to be a bit too busy to properly service the tables.  At least at times during my one trip, and from what I've heard from other reports.  To wit, my first glass of wine never arrived and we had to ask again.  Then we had to flag down somebody, anybody, for the second.  In a room as small as the one we were in, servers should be able to see out of the backs of their heads.  They should have just felt that someone needed something.  I'll give them a pass, though, as the place is new.

Overall the staff is nice and friendly.  The people manning the host stand were friendly and gracious.  Our drinks ordered from the bar were transferred to our table with no questions asked.  You don't find that enough. The bartenders were quick with a joke, and I suppose they'd be quick with a light up your smoke if that was allowed.   And judging by the bar business and wine prices, there probably wasn' t someplace that they'd rather be.

They're now open for lunch, and I'm told they have a burger on the menu.  This could be a very good thing.

When we wrapped it all up at 10:30 or so, there was still not one open spot at the bar.  I'm curious if they can keep up this much early-week business, what with their NYC steakhouse-pricing and not-quite-as-good-as-NYC-steakhouse food.

The place was jammin'.  People were lined up waiting for tables.  People were hovering around the bar area waiting to pounce on the first open seat (bar dining is almost always preferable).  There were a lot of suits and moneyed looking people enjoying themselves at the bar and all throughout the three dining rooms.  What a scene I tell ya.  And what were they there for?  Steak and really expensive wine, from what I could tell.