Trader Joe's in Paramus: let's see what they got 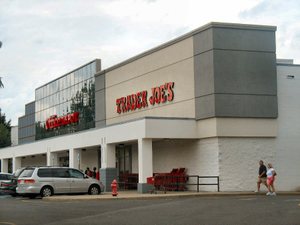 So an outpost of Trader Joe's moved into Paramus, NJ, a few weeks ago.  The internet and blogosphere were abuzz with excitement.  Neighbors were talking, people were phoning up the place, wondering when it would open, barely able to contain their excitement over the prospect of a Trader Joe's opening 5 miles (10 minutes on a bad day) from the existing Trader Joe's in Westwood.  Everyone, that is, except me.

I recall years ago when friends from California were telling us how great Trader Joe's was.  Hell I think we even went to one out there at some point (not a memorable highlight of a vacation, apparently).  When we found a few stores here in NJ, we checked them out.  Several times.  Several locations.  We drove to Westfield.  To Westwood.  To not-west Wayne.  Not once did we leave the store with anything aside from a few bottles of Two Buck Chuck, and maybe a bag of nuts.   And that was a mistake for another blog entry.  I describe TJ's as "a bunch of random crap, with frozen meats and frozen other things."   Generally speaking, with the frozen angle and all, not my kinda place.

But, it was hard to ignore the buzz about this Paramus store.  So we decided to check it out.

We did a fly-by just to get a feel for it.  And because we were bored.  The store is wide-open and roomy.  Contrast this to our earlier experiences at other cramped TJ's.  But, unlike previous experiences, we actually saw a few things that looked interesting.  Perhaps our standards are lowering.  Or perhaps we're more keen to find bargains.  Perhaps I'm more a sucker for "natural" and "organic" these days, which are TJ's bread and butter.  I dunno.  So anyway, we grabbed a basket and filled it up with various items:  some for that night's dinner, some for snacking, some to stock our pantry.

That very night I figured I'd make a Trader Joe's meal.  The menu consisted of the following:

The rest of the booty, for another time, included: 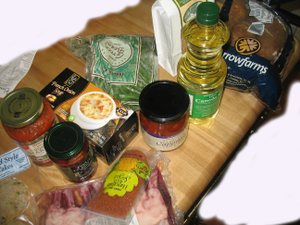 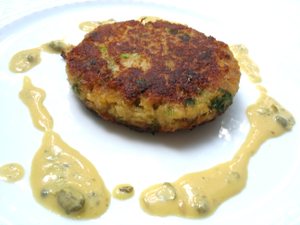 The crab cakes are sold frozen, and are about 3 dollars for two.  For 3 dollars we didn't expect much, but they were fishy and not all that good.  If not for the mustard and caper sauce that I made (mustard, capers, butter, white wine), they would have gone straight to the bin.

The bag of haricot vert at about 2 dollars seemed quite a bargain.  They're frozen, and the bag has about 6 or 8 servings.  That's an amazing deal I'd think.  And they were well worth it.  Sauteed with a bit of butter and s/p. 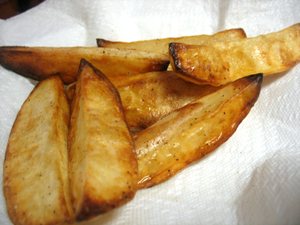 The french fries were made from  baking potatoes.  $2.69 for 5 pounds of baking potatoes.  That seems like a steal, although I really don't pay attention to the price of potatoes at other stores.  Regardless, they were quite good.  Baked in the oven (soak the potato wedges in water to leach out some starch, dry, heat the roasting pan first, and then heat oil in it, and then put in the potatoes...this helps them not stick). 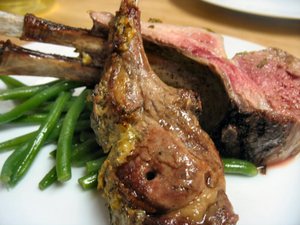 The lamb was pretty good.  I don't buy it often, so I can't speak to the 20 dollar price tag.  It's nicely trimmed when you buy it, which is good, as you're not paying for fat that you'd throw out.  Roasted in the oven to 125 degrees, covered in the mustard/caper sauce and a paste of garlic, EVOO, s/p and rosemary.

For dessert we ripped open the bag of 4 dollar biscotti, to snack on while finishing the red wine.  The biscotti was just horrid.  As I took a sip of red wine to wash out the flavor, it all created an enormous car wreck in my mouth.  The biscotti, as horrible as it was on its own, mated with the wine and produced something so putrid that words wouldn't do it justice.  At that point the choice was to throw out the wine to continue eating the biscotti, or throw out the biscotti to continue drinking the wine.  I think you know the outcome on that one.  The biscotti went, and I rinsed my mouth out so I could salvage the last few sips of wine.  Contrasted to the huge and delicious container of biscotti that I buy at Jerry's in Englewood I'd say this was not a bargain.  At all.

So, given that we wanted to throw out two of the things we bought (so far), I'm not sure I'm convinced of anything about Trader Joe's and its selections and value.  But, I suppose I could see myself going there for a few choice items.  Which, now that I think about it, seems to be what people have been telling me they do for years now.  I guess I'm a slow learner.

Trader Joe's in Paramus: let's see what they got

So an outpost of Trader Joe's moved into Paramus, NJ, a few weeks ago.  The internet and blogosphere were abuzz with excitement.  Neighbors were talking, people were phoning up the place, wondering when it would open, barely able to contain their excitement over the prospect of a Trader Joe's opening 5 miles (10 minutes on a bad day) from the existing Trader Joe's in Westwood.  Everyone, that is, except me.