Fleming's Steakhouse: lots of wine, but no clue 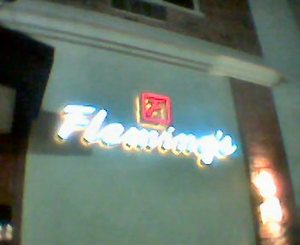 Fleming's Steakhouse is a chain that serves USDA Prime wet-aged beef.  They offer over 100 wines-by-the-glass, and that's a good thing.

My second visit left a bad taste in my mouth.  Specifically the taste of TCA and poor customer service.

We were part of a party of about 10 people.  The party formed at the bar, as parties tend to do, where we ran up quite a tab.  When everyone arrived, we moved to the table.

We ordered a good bit of wine, as it was a large party.  Several bottles hovered around the $150 mark, and a few others were $28.  This might illustrate the breadth of their list.

When we ordered two additional bottles of the 28 dollar wine, one was presented for tasting, and was approved.  The other bottle was simply opened and poured.  Mistake #1.  Now, I've not kept any real statistics, but I'd say that 5% of the time that this happens, the wine is going to be corked.  I suppose that makes sense as estimates of cork taint usually come in at around 5%.  This bottle was part of that 5%.

Since it was only a 28 dollar bottle, I wasn't going to mention it.  But someone at the table did bring it to the server's attention (rightfully so), and the wine and a few glasses were whisked away.  OK, so at least they appeared to be handling this a bit better than the initial pour-without-a-taste.  I was hoping for an elegant recovery, because I was having fun and wanted to like the place, even if they're only wet-aging as opposed to dry-aging.

Some time goes by and when I see our server I ask what happened with that corked bottle.  "Oh, the manager said it was fine."  I assume that if I hadn't had followed up, I would not have heard another word about it, although I guess it would have been removed from the bill.  Mistake #2.

Being a bit taken aback by the cavalier way in which that transaction was handled, I responded with "But I said it wasn't fine."  The server reiterated that the manager said it was fine, to which I responded that I'd like to speak with this manager.  "OK", and she ran off.

A few minutes later the server returned, without the manager, and said that they'd comp the bottle for us.  I got the feeling they were really being put out.  I reminded her that it was a lousy 28 dollar bottle and it was hardly worth my or the manager's time to even discuss this.  I mean, did they think it was some sort of power-play that was best ignored?  Looking back I guess I didn't have to say anything at that point, because the issue had been addressed as far as the restaurant was concerned.  But, I suppose I was just shocked that it had gotten to that point with a 28 dollar bottle of wine on a tab that was about 2 grand -- and had to verbalize my discontent.  Wasted breath.

With the exception of this issue, the staff was friendly and gracious.

Fleming's:   your steaks aren't dry-aged, your prices are high, you don't know corked wine from your butt,  your approach to customer service is embarrassing, and you won't be getting any more of my dollars.  Your "wedge" salad was pretty tasty, though.

Fleming's Steakhouse: lots of wine, but no clue

Fleming's Steakhouse is a chain that serves USDA Prime wet-aged beef.  They offer over 100 wines-by-the-glass, and that's a good thing.

My second visit left a bad taste in my mouth.  Specifically the taste of TCA and poor customer service.