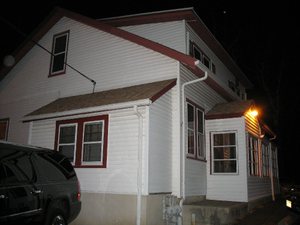 It took 45 minutes to get there and 40 minutes to eat one of worst meals in recent memory.  And it's not cheap.

Many sources have told me that I "have" to go to Sammy's.  According to reports, they have "the best steak."  "You wait downstairs at the bar" while your food is being cooked (implied niftiness).  They have a "great wine list."

I think those sources were yanking my chain, and I wouldn't be surprised if they were all lined up outside the windows just to see the look on my face as I ate that 180 dollar mess of a meal. 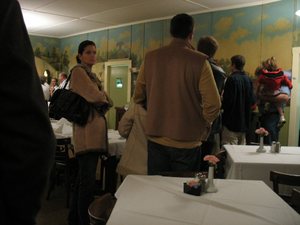 Let me get right to that policy of standing in line (outside if the line is long) to place your order.  You have to be friggin' kidding me.  The chaos and ensuing stress of having people squeeze by you in line to meet their friends or loved ones who arrived earlier to get in that line, and the frustration that comes from watching people take 10 minutes to order from a relatively small menu, is enough to make you want to skip the ordering process and head right down to the bar...for good.   And it's not even a particularly fun or nice bar.  It looks like an Elks club, and is just about as comfortable (I don't have much experience in Elks clubs, but enough to know they're not generally my pre-dinner preference).

After a bottle of beer (that "award winning wine list" apparently didn't make it to the by-the-glass selections in the basement bar) and one of the smallest martinis I've ever seen we were called up to our table, right next to the front door, which is sometimes held open by people standing in line to order the food.  Sound fun?  Sure is.

At least there's a salad waiting on your table.  Now I'm no back-of-house expert, but I'm guessing big bowls of this stuff are mixed up in advance, and then plated as needed.  Why would I say this you ask?  Because the lettuce was soggy and limp.  Really limp.  But, I have to admit that the red wine vinegar, which is made right there at the restaurant, is very good.  Nice and assertive.  That vinegar, paired with the onions, made the salad quite palatable.  I just can't help but think what it could have been with freshly mixed greens.

Their website proudly proclaims that their lobsters "taste like they were just plucked from the water".  Well I should bloody well hope they do!  Aren't you supposed to pluck lobsters from the water and then cook them, like, soon after, if not immediately?  I cannot confirm or deny their claim, as I didn't order lobster proper, but I can say that their lobster cocktail "tasted like it was just plucked from the water and cooked yesterday."  Ice cold.  With a bunch of cocktail sauce.  Think "glorified shrimp cocktail".  Tasty enough. 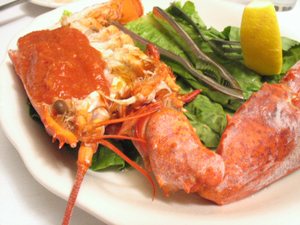 We ordered a simple, fruity, inexpensive wine from that wine list.  The wine list included representatives from most parts of the world, and seemed reasonably priced.  But judging by the temperature at which our wine was served, I'm not sure I'd spend more than 50 dollars on a bottle here.  The wine was well above an appropriate temperature.  Probably more than room temperature.  I asked the (very nice) waitress (who really doesn't do much other than take your wine order, what with this stand-in-line-to-order approach) if she could chill the wine down a bit.  She brought one of those plastic sleeves that are usually used for white wine.  Not a metal and chilled sleeve, but a plastic not-chilled sleeve.  It doesn't take an engineering degree to figure out that this thing did nothing but help keep the wine at the well-above-room-temperature temperature.  Sigh.

We also ordered two glasses of "Great Western Champagne."  Since I was pretty sure that anything named "Great Western" was most likely not from Champagne, France (should probably not be called "champagne" in that case), -- and being curious about its origin -- I asked the waitress where it was from (that award winning wine list didn't mention that bit of information).  She acknowledged that she didn't know (thank you) and said she'd go find out, which, of course, is the appropriate reaction.  She returned moments later and said that it wasn't from France, "so it's not really 'champagne"' (YAY!) and that it was "from Mexico...or New Mexico, or something like that."  Sigh.

Anyway, having recently returned from a vacation in New Mexico, where I enjoyed much of their local sparkling wine (Gruet), and having never had sparkling wine from Mexico, I figured I'd give it a shot.  It was a bit flat, and some extra bubbles might have help cut through the cloying sweetness.  But, it was a big pour for a few dollars, so I can't complain too much.  As an aside, some googling didn't turn up any "Great Western" in Mexico or New Mexico.  There are "Great Western" wineries in New York and Australia, though.  I can see where the confusion came from.

All of this aside, I still had high hopes for this steak.  We ordered the porterhouse for two.  A benchmark cut in my opinion.  The steak is dry-aged, according to the restaurant.  It is not, however, USDA Prime.  I'm not that much of a stickler for Prime as the grading system seems nebulous, but I am a stickler for expecting the telltale qualities of dry-aging (tenderness and minerally flavors) and proper cooking technique.  I always qualify my preferences on steak by stating that I have a bias for the Luger's school of aging and cooking (charred on the outside). 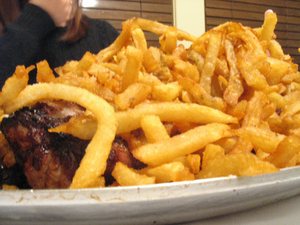 Out comes the steak, covered with a pile of french fries.  I have to think that a pile of fries does nothing for the char of the steak or the crispiness of the fries.  We took a few minutes pushing the fries around looking for the steak and uncovered a few pieces of beef which had been sliced off the bone.

The steak had very very little char.  Some places had a bit of char, but mostly there was none.  Upon further inspection I determined that it was likely cooked on one side and then put on a hot plate to cook the other side.  While it was pink inside, that pink just kind of faded away to gray.  The bone, however, had a lovely char on it.  A char that just didn't jibe with the steak.  We couldn't help but think that they re-use the bone, which would get more and more charred each time.  Which makes me wonder what steak they were placing next to it.  OK, so I'm pretty sure they're not reusing bones, but I'm just sayin'. 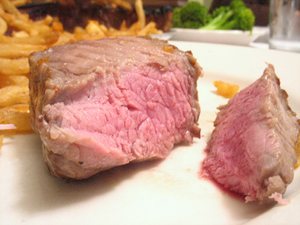 One piece of filet did have some nice minerally flavor.  But that was it.  The rest had little steak or mineral flavor at all.  It was also not seasoned with salt and pepper as aggressively as I would have liked.  On a positive note, there was no chewy sinew running through the pieces we ate (we didn't bother finishing the thing).

The fries were pretty good.

For your 100 dollar steak-for-two, you get that broccoli, those fries, the limp salad, and dessert and coffee.  Dessert and coffee were quite decent.  Or maybe that's only because we were so hungry when it came.

It took 45 minutes to get there and 40 minutes to eat one of worst meals in recent memory.  And it's not cheap.

Many sources have told me that I "have" to go to Sammy's.  According to reports, they have "the best steak."  "You wait downstairs at the bar" while your food is being cooked (implied niftiness).  They have a "great wine list."

I think those sources were yanking my chain, and I wouldn't be surprised if they were all lined up outside the windows just to see the look on my face as I ate that 180 dollar mess of a meal.