My three favorite words to stumble upon when perusing a menu?  "Egg on top." 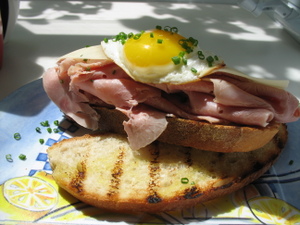 Mario Batali puts a raw egg on pizza (we do, too).  He just plops a raw egg right there on top of the pizza at Otto.  Right in the middle.  Just ask if you want it.

A boring frisee salad?  Not with an egg on top (chunks of fatty pork don't hurt frisee either, but that's for another post).  Courtesy of those clever French again.

City Place Steakhouse, which , recently opened on Rt 17 South in Carlstadt, is long closed, offers a fried egg on top of their steaks.  Yes, please.

Japanese eaters put egg on fried pork cutlet for katsudon.  It takes something special to make fried pork even better...and egg it is! 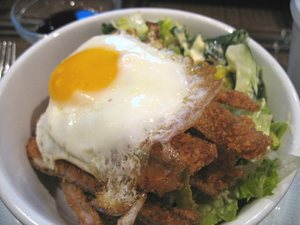 And who of us here hasn't gone to the diner and ordered a short stack of pancakes with an egg on top in an effort to make that hangover feel just a wee bit better.  None of us I say. 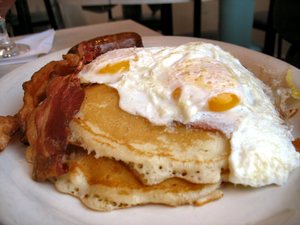 Those guys at Amazing Hot Dog (now closed) in Verona, NJ, put a fried egg on top of a hot dog, which clearly approaches genius. A respectful nod to...

Perhaps most importantly, you can't have a taylor ham egg and cheese sandwich without an egg on top of the taylor ham.

At the end of the day, next to the thighs, the egg is without a doubt my favorite part of the chicken, especially when it's on top of something.

To summarize: when you see "egg on top", order it.

My three favorite words to stumble upon when perusing a menu?  "Egg on top."