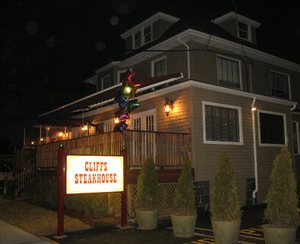 My preference is for the latter two.  But for now I'm going to focus on the third.

It couldn't have been more than a few years ago that Wolfgang Zwiener (not Puck, people), a long-time veteran of Peter Luger, opened what was essentially a clone, food-wise, of Peter Luger on Park Ave in Manhattan.  There's the steak for two/three/four, the lamb chops, the tomato and onion salad, the bacon by the slice appetizer, and that boat of horrible cocktail sauce that each table gets.  I couldn't have been happier and I've since had more than a few steaks at Wolfgang's both at his original Park Ave location, and his newer Tribeca restaurant.

Shortly after that, two fellas named Ben and Jack, who worked at Peter Luger for years, struck out on their own to open their clone called Ben and Jack's (a favorite of mine) in Midtown Manhattan.

More recently the Benjamin Steakhouse opened in midtown Manhattan.  I haven't been, but let's just say that the menu looks very, um, familiar.

All of this is has been great for NYC. No longer do Manhattanites and Manhattan workers have to cross the East River.  But poor New Jersey:  stuck with a couple of high-end chains that serve wet-aged beef at dry-aged prices, Arthur's Tavern, and the spotty River Palm Terraces.  And still a river between us and that Luger-style steak.

At least up til recently...

It seems that the folks who own Cafe Italiano Ristorante (lots of Italian words in that name) in Englewood Cliffs know a guy who knows some guy  whose cousin is a friend of a guy whose neighbor worked at Peter Luger.  Just joshin'.  Truth be told there are two chefs, cousins, one of whom worked at Luger, and now he's in the kitchen at Cliff's Steakhouse, right next to Cafe Italiano.

From what I gather, when you work at Peter Luger, you have access to secrets that allow you to replicate their dry aging process, and presumably you'll have access to the same top-flight best-of-the-best prime-of-the-USDA-graded-Prime beef.  I can believe the former, but I'm not convinced of the latter.  Regardless, Cliff's steakhouse is a good alternative to the local chains, and, you can get an experience and food that reminds you (albeit a bit vaguely at times) of your favorite meals at Peter Luger (and Wolfgang's and Ben and Jack's).

The menu is obviously familiar and for that reason it's not even needed when I walk in.  My meals at Peter Luger and its clones always go something like this:  1 piece of bacon to start, steak for two, German potatoes, creamed spinach.  Just typing that gets me going.  Recent meals at Cliff's went the same way.

But first, my thoughts on consistency.

My experience has been that all steakhouses suffer from inconsistencies as far as the quality and flavor of their beef goes.  The stuff I buy at butchers does as well.  A certain percentage of the time you're going to get a chewy sinewy piece of meat, and more often than that you'll get a steak that doesn't have those minerally tones that fans of dry-aging love so much.  I've always assumed that Peter Luger is somewhat less inconsistent than its competition, which is part of the reason that it has remained on top for so many years.  Other factors include its fans refusing to admit that it's not as good as it used to be, and what I would call the lure of the lore of the place.  Actually I wouldn't normally call it that.  I just made it up.  You can use it if you'd like.

As far as inconsistency goes, Cliff's seems to suffer along with the rest.  My first steak convinced me that they were serving the best steak in New Jersey.  Another steak was too fatty and chewy, wasn't sliced very neatly, and didn't have enough of those minerally flavors that I'm always chasing.

There are a few issues that kinda stuck in my mind:

The Peter Luger-style suggests that your steak is served on a very hot platter, sliced, in a bit of clarified butter.  Cliff's is with the program on this, but they take it a step further:  the individual plates for the diners are also amazingly hot and contain a small pool of clarified butter.  Basically you have servers trying to set down this blisteringly hot plate with butter popping and splattering inches from your shirt.  Additionally, the Peter Luger-style of serving suggests that the servers rub the slices of steak on the hot platter, giving them a quick sear, and then place them on your plate.  Cliff's uses the individual plates for this process, which means, you have a server rubbing your meat on your very hot plate with butter popping and splattering.  The hot plates do nothing for your creamed spinach, either.  Anything they put on that plate is going to cook and cook fast, including steak.

There are a couple of reasonably priced bottles of wine on the list.  In fact the markups seem relatively modest.  The list isn't deep or wide, but it's fine for my taste, which admittedly is not very deep or wide.  The (red) wine is served much too warm, however.  I needed to have the bottle put on ice, and I've seen others request this as well at Cliff's.

Martinis and steak apparently go together.  I don't drink martinis, as I have no love for straight vodka (or gin for that matter).  BUT, a masculine steakhouse should be serving a masculine martini.  The martinis here are a bit on the small side, and just don't scream "STEAKHOUSE MARTINI" to my mind.  But like I said, I don't really care as I don't drink the poison.

Most people know that Peter Luger's (and clone's) "steak sauce" isn't steak sauce at all.  In fact, it's basically cocktail sauce.  As such it should be eaten with shrimp cocktail, or, if you're me, with bread.  It should under no circumstances go anywhere near a piece of Prime dry-aged steak.   On one visit the server pointed out the sauce and told us it was for the steak.  I really wish they'd just ignore the sauce and not try to get people to defile their steaks with the stuff.  It should be on the table only to remind you that you're at a Luger clone.  Everyone, please, repeat after me: IT'S NOT FOR STEAK.  IT'S NOT FOR STEAK.  IT'S NOT FOR STEAK.

A baked potato comes with your steak.  I don't like baked potato all that much and I don't like wasting food.  Invariably I'll order their version of the German potatoes (not as good as Luger's, B&J's or Wolfgang's), which means I'll have way too many potatoes on the table.  I can appreciate that they want people to sense that they're getting some sort of value out of the 79 dollar steak for two with this inclusion, so I guess I'll have to remember to tell them not to bring out that potato.

Would I be crazy to suggest that the steaks seem a bit smaller than those of the competitors?  At first I didn't think so, but friends suggested this to me, and then I kinda started thinking that way.  There's enough meat on that porterhouse for me and the missus, but I can see how two fellas with big appetites might power right through it and still be hungry.

On a very positive note, the side dishes can be ordered for one or two.  Small or large, basically.  The small sizes run about $2.50-$3.00.  This is great, as you can have a variety of sides, even if you're only a two-top.  At most steakhouses, the side dishes are 8 or 9 dollars, and are portioned to be shared.  The smaller sizes and smaller prices at Cliff's are right up my alley.

Of course I had to try the burger (11 dollars) at Cliff's (served at lunch only I'd think).  I love the burger at Peter Luger.  The burgers at Ben and Jack's and Wolfgang's are very good as well.  They're making these things with scraps of dry-aged beef, so your burger tastes dry-aged.  That makes for a tasty good burger.  Cliff's overcooked mine, as steakhouses too often do.  It was clearly well done, although it was ordered m/r.  It was served on ciabatta, which gave me cause (not pause) for concern.  But it worked out nicely. Ciabatta is good bread.  I really can't comment on the flavor as the thing was so overdone.  I'll give them one more shot on the burger, and then they're off the list.

Overall I'd say that Cliff's is doing a good job, even though they've got some issues they should work on (lose those hot buttery plates please!).  If you're into the Peter Luger menu and style of dry-aging and service, you will probably enjoy Cliff's on some level.  If you think that no steakhouse comes close to Peter Luger, Cliff's won't change your mind.

My preference is for the latter two.  But for now I'm going to focus on the third.