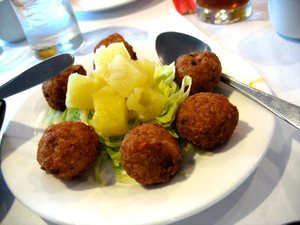 t:e reader Curlz emailed me a few months ago to tip me off.  About a month later we went rolling into this BYO on a Sunday night, with high expectations.

To our surprise, there was a line of people waiting for tables.  I'll cut right to the service that night and say that it was certainly struggling, no doubt due to the huge crowd.  We ordered two starters and two entrees, figuring two courses would be served.  I can appreciate that at some restaurants like this, food will come out when it's ready.  That's fair enough.  But when your entrees come out first, one at a time, with 10 minutes between each, and then your starters never come out, something is going horribly wrong.

Anyway, the service has been better on subsequent visits.  And it's never been quite as crowded.

The only important thing is the food.  Chengdu 1 is producing Sichuan food that rivals that of the best Sichuan restaurants in NYC. 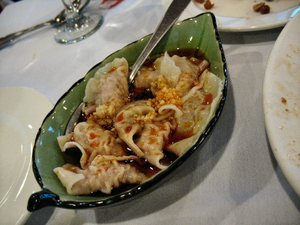 Spicy wontons come in a pool of chili oil (oil is a key ingredient in Sichuan cooking) with an impressive amount of raw garlic. A real winner. 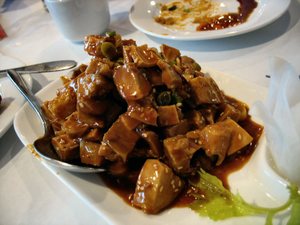 An appetizer of Chicken Ding was ordered on two different visits and came out differently each time.  The first time the chunks of chicken were served in a chili-oil based sauce.  The second time they were served in what was likely a sesame paste sauce (not peanut butter, as people tend to think, although it is similar in flavor).  As far as the type of meat in this dish, my guess is that the chicken doesn't even know he has these parts.  Good stuff.  Muscle tissue no doubt, and not offal, so don't worry. 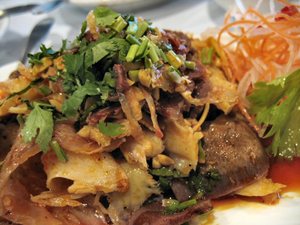 But if it's offal you want, it's offal you'll get.  They have a good a version of Ox tongue and tripe as I've ever had.  Just enough Sichuan peppercorn to numb your lips, and a generous pile of shaved stomach lining and tongue. 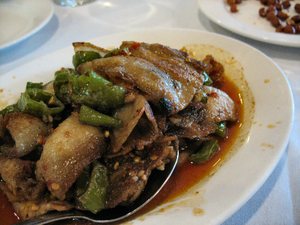 A pork dish called "sauce salted pork" blew my mind, man.  Wonderful fatty slices of pork belly served with hot green peppers.  Spicy, fruity, fatty, and perfect with Riesling.  Wu Liang Ye has an identical dish, but a horrible wine list.  Since Chengdu 1 is BYO, it has the best wine list in the state. Some sort of dried beef dish also pleased, although I forget the name of it.  "Spicy beef", or something like that.  China 46 has a similar dish on occasion.  The flavors in this dish are reminiscent of Indian dishes, with what I assume are cumin and possibly coriander. 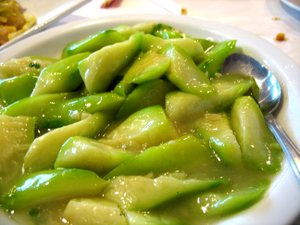 Luffa, a cucumber-like vegetable, normally dried and used to scrub ones skin, was worth the additional coupla bucks.  This reminds me that I have to order more vegetables when I go back.

Ma Po Tofu does not fail you here.  Again, I've not had versions much better than this.  It's a bowl of tofu and minced pork with a ton of mouth-numbing flavor (those Sichuan peppercorns in action again).  How they get so much flavor into a bowl defies the laws of physics.

Their version of Shrimp Balls (pictured at the top of this post) was adequate.  China 46 makes theirs with broth in the middle.  Very juicy and flavorful.  Chengdu 1's were more like shrimp toast.  Tasty, don't get me wrong, but not up to China 46's standards.  Perhaps this is a Shanghainese dish?

Unfortunately, the menu doesn't clearly state what is authentic Sichuan-style cooking, and what are piles of sweet non-food crap that many people seem to like (you are free to have lousy taste, but there's a chance I'll make fun of that taste).  In general, the orange colored parts of the menu are the real deal.  When in doubt, look for items in the section of the menu that you're considering:  if you see "sea cucumber", you're in the right place.  If General Tso pops up, look elsewhere.  The dish is described as "Western Style"?  Nut-uh.  Move on.  Nothing to see here.  Conversely, you can ask your server if what you're ordering is authentic.  I've had luck with that, but I can appreciate that all servers are different.

The Christmas music playing over the system was clearly a nod to the famous late-July Christmas celebration.  A very popular holiday in Chengdu.

Our most recent meal was on a Sunday afternoon with a couple of friends.  Even though it was lunch and should have been a casual meal of a few dishes, I ordered like it was 1999, as I'm wont to.  We had way too much food, but the bill still came out to 40 per couple.  If you translate this meal into a regular, normal, human dinner situation, you'll find that it represents a great value, especially when you factor in the quality of the food here.