The first order of business was to sort out the margarita situation.  A challenge, of course. Jimmy Buffet sings a song about margaritas, and a lot of drunk people sing along whenever it’s played. Those people are probably drinking Bud long necks (there’s nothing wrong with Bud long necks) as they’re singing, but in the event they are sucking down a margarita, well you just know it’s not a very good one. Assuming Jimmy knows his fans like I know his fans, I would assume that he would set the bar pretty low for margaritas at his restaurant (factually speaking, I don’t think he has a financial interest in the place anymore). And he sure has.

The “Top Shelf margarita” is listed as being prepared with “all-natural lemon, lime, and orange juices, Patron silver tequila, Cointreau, and Grand Marnier.” Sounds good, right? Yeah not so fast there captain. Being a skeptical sort, I asked the bartender what he’d actually put in that drink, in addition to that lovely list of booze. He said there’s a mix they use. I asked what was in it, and he sure didn’t know because it’s obviously made in a factory somewhere. My guess was this isn’t a lemon, lime, and orange squeezing factory either.

I was offered a taste of this stuff, which presumably contained the “all-natural lemon, lime, and orange juices,” and was treated to a mouthful of what I can only describe as liquid Pixie Stix. Remember those things? They were straws filled with colored sugar. Sour, sweet, disgusting. Just like this mix of “all-natural lemon, lime, and orange juices.”

Armed with that knowledge, but still wanting Patron, Cointreau, and Grand Marnier, I begged the bartender to use just a tiny tiny bit of that mix. “Uh, the drink is mostly the mix,” he says. Yikes. But no shocker there. I said “I don’t care if it ends up being just half a glass, just wave the mix bottle over the drink.” He went off to make the thing.

<rant>This process illustrates the all-too-widespread need to take control in order to get the most out of a bar or restaurant. To wit, I knew that they had premium liquor. I was reasonably sure that they had ice. I guessed there was salt of some sort somewhere under that roof. A clean glass was surely available. All I had to do was to act as the puppet master and get those things all together and in front of me, without letting the masterminds behind “Cheeseburger in Paradise” screw it all up before it came together in my mouth. </rant>

Our man came back with a drink and told me that it might be a little strong, because he added some booze to it to make a full glass. That-a-boy.

So how was it? Sweet and kinda not very good. No traces of Patron-y goodness. After about 10 minutes of non-enjoyment,  I realized that I could squeeze the orange and lime garnish in the thing to jump start it, and that helped immensely.

I glanced at the bill, which was placed in front of me, to see how much this disaster was going to run me. I saw a total of 11 bucks and change, and figured that was par for the course. Ten dollars for a premium drink at a chain restaurant isn’t unheard of, I’d think. Upon closer inspection, I noticed that this included the price of the burger that I hard ordered (I’m getting to that). The margarita was, get this, $2.85. For eff’s sake, I should have ordered 4 of them, had the kid put all the booze in a pint glass with ice, screwed the sour mix, threw some lime wedges in it and called it a day. I have to say $2.85 is pretty darned cheap, even for a glass of “all natural lemon, lime, etc”. If I were 23 years old again boy, I’d do some damage here with those prices and that horrible 23-year-old taste that I had. 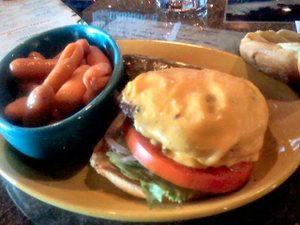 Stylistically, I would describe the burger as a roadside stand type of burger. A step above a fast food style of burger girth-wise. It was served m/r as requested, which was a shock as most chains won’t serve ground beef at any temperature under medium (and that’s just as well, because the meat is usually pretty poor to begin with). It came with some pickles, and a mealy tomato (not nearly as horrible as it could have been, and I’m guessing way better than it will be in the dead of winter), and some lettuce. The cheese was unexceptional and its texture was a bit overpowering and gooey (processed cheese?). The bun was way too dense and heavy bun relative to the burger. I mean, not a horrible burger, but nothing all that great either.

I passed on the fries and ordered the vegetable du jour. “Caramelized carrots” sounded pretty good to me, visions of carrot slices roasted in EVOO with salt and pepper dancing through my head. But as I sat there, waiting for the food, sipping from that goblet of Pixie Stix juice, it occurred to me that I was not about to served sliced carrots roasted in EVOO and salt and pepper. No, I was going to get something completely different. And boy was I right.

The carrots were those “baby carrots.”

<rant>Now, make no mistake about it, “baby carrots” aren’t “baby” at all. They come from fully grown carrots (which are fine) that are processed in shiny machines in a factory (getting worse) thousands of miles away from where you’re sitting (I’m not liking the sound of this, Beavis) and milled down into little nubs that look more like amputated digits than they do baby carrots (yeah, baby carrots suck). And then they’re probably coated with a carrot skin (the stuff they just removed) replacement so they don’t brown while they’re shipped to a store near you. Why aren’t people happy enough with taking something out of the ground, rinsing it off, and eating it? Why the cutesy names and shapes people? Why the processing? The more you eat it the more they’ll make!!! Why why why!!?!! What’s wrong with all of you people!?!?!?!?!?!?!</rant>

There was no sign of roasting, and not a hint of natural sugars from the carrots. Instead, they were in a broth of some sort, which was so sweet, and flavored so aggressively with flavors you might find in a bakery, that I had to review the menu to see if they listed “dessert carrots” that they might have served by mistake. Actually I didn’t, but I couldn’t come up with anything better there. For the most part, I don’t make stuff up as reality is way interesting. They would have made a nice muffin. No lie.

The big ol’ half a dill pickle was good.

There are very few singers that I appreciate less than I appreciate Jimmy Buffet. Sammy Hagar is one of them. Don’t get me wrong: I think Sammy is a really nice guy. He’s grown on my over the last 20 years. But damn that’s some horrible music he makes. No amount of Cabo Wabo could get me to sing along with “Margaritaville,” much less “Right Now.” Anyway, I have to think Sammy’s place in Mexico is better than Jimmy’s place. At least he respects and appreciates tequila.