Home Archives and Categories RSS Feed t:e map Restaurant Photos About
Verizon: at the Tick Tock: Clifton, NJ
Blogging from the bar on an iPhone: at Crave: Fairfield, NJ

Over on the blog I Am Not A Chef, the blogger known only as 'I Am Not A Chef' was discussing great and simple combinations.  Specifically, shrimp and cannellini beans.

I figured I'd one up him with an even more simple shrimp/starchy stuff combo:  Ceci, shrimp, chiles, a la Mario Batali's Otto. 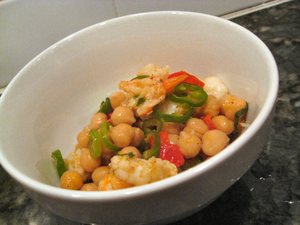 But first, I could go on and on about how enjoyable it is to eat at the bar at Otto.  Friendly, knowledgeable bartenders, comfortable seating, a great big bar, great food, and great wine service.    Every time I've ordered a glass of wine at Otto, I've received a tasting of 3 or 4.  A blind tasting if the bartender has the time, and sees you're into that kind of fun.  The point of it is, I suppose, that the bartenders want to drop some knowledge on you, and give you enough to make an informed decision.  They also seem to genuinely enjoy seeing people enjoy new experiences.  <NJ rant>Normally I'd bitch and moan about the state of NJ bars/restaurants/service here, but let's keep it positive shall we?!</NJ rant>  It truly is one of the best food experiences in Manhattan.  If you've never done it, I'd suggest a weekday lunch at Otto, at the bar of course.  Not to be missed.

I've taken more than a few wine finds away from Otto, not least of which being Falanghina, which for me is one of the more exciting wines coming out of Italy at the 13-15 dollar price-point.   I also appreciate that they pour prosecco into big ol' white wine glasses.  None of these wussy "flutes" for prosecco damnit.  You can learn a lot from a restaurant like Otto.

Along with that excellent wine program, Otto has some pretty good food.  One of my favorite dishes, and one that's been on the menu there as long as I can remember, is Shimp, Ceci, and Chile.  It's a simple dish, served at room temperature, and it really can't possibly consist of much more than what its name suggests.  As with Italian food in general, its simplicity struck me.  Good, simple ingredients, and the right balance, are really all you need.  I make this at home whenever I remember to. 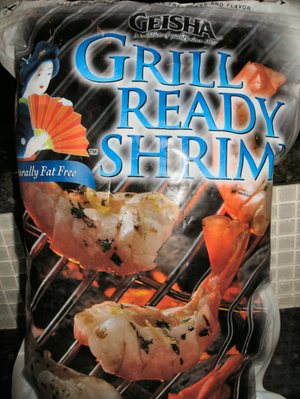 My mother-in-law, who is known to be always right, suggested that I keep Giesha brand frozen shrimp on hand in case of emergencies.   She more than suggested it, she bought a bag for us.  I think it's available locally at A&P Supermarkets.

I have to say that this stuff is just fine in a pinch.  They are butterflied and cleaned, a decent size, and ready to go right from the bag.  Just defrost under cold running water.  Not to bum you out with reality, but that shrimp you buy at the store has been frozen at some point too.  And I'd rather be in charge of the defrosting.

I cooked them briefly in salted boiling water, and chopped them up into roughly ceci-sized pieces.  Try not to overcook shrimp.  People get wacky with seafood and cook the hell out of it as if it's poisonous if they don't.  It's not.  Or at least it hasn't killed me yet.  I also sliced up some seeded chiles.  I want flesh more than the heat, so the seeds and white membrane go.  Any tasty hot pepper would do I would think.  I go for serrano. 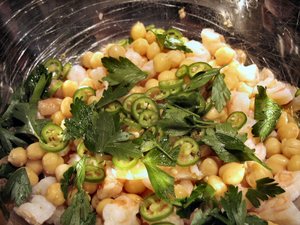 In addition to the shrimp, chiles, and chick peas, I figure this dish has some olive oil in it.  And maybe some acid.  A squeeze or three of lemon.  Some parsley as well.  I bet mint wouldn't be bad, either, especially in the summer.   I toss all that stuff together and that's pretty much it (plus salt and pepper obviously...and don't be afraid of salt).  Let it sit for hours if you want, so all of the flavors mingle.  It makes a nice side dish any season of the year.  A nice antipasti dish as well.

Over on the blog I Am Not A Chef, the blogger known only as 'I Am Not A Chef' was discussing great and simple combinations.  Specifically, shrimp and cannellini beans.

I figured I'd one up him with an even more simple shrimp/starchy stuff combo:  Ceci, shrimp, chiles, a la Mario Batali's Otto.