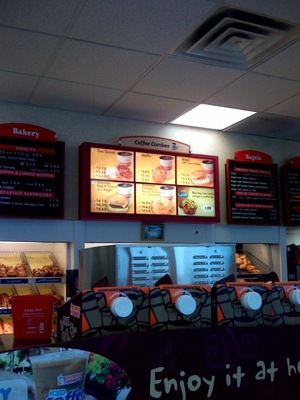 Take, for example, the offer to add fried potato nugget things to your combo for 99 cents. <rant>Business owners, please note that it's not ".99 cents".  It's "99 cents".  Unless you own a gas station, in which case you're for some reason allowed to price their product in amounts 1/10th of the most worthless unit of currency that the US produces.  "I'd like exactly 1 gallon of gas, and not 1/10th of a penny more. Figure out how to make the change for that one, gas station guy". </rant> And who doesn't want some fried potato nuggets with their donut and coffee.

They also have a nice deal on your typical double donut breakfast.  A "Number 1" on their shortcut board.  With your coffee, you'll get two donuts.  Two.  For breakfast.  Not just one.  But two.  It's not as though they even have a shortcut number for a single donut and coffee. They just go straight for the deuce.  Saying "I'll have a #1" gets you two donuts.  How about "I'll have a #1, I've just lost all hope."

Who eats two donuts for breakfast!?!?!?!  What's wrong with people.  They're tasty, I'll give you that, but come on.

OK, well, maybe on Friday it's OK.  Yeah sure why not.  I mean two donuts once a week isn't a big deal right?  OK.  Cool.  Personally, I like an old fashioned and then I plow right into a nice glazed.   You can lick the sugar off your fingers from a glazed for hours.  Washing your hands doesn't even completely get rid of it.  Only the saliva does...lots of it.  And even that takes time.  It's as if the sugar glaze regenerates in your mouth and gets put back on your fingers.