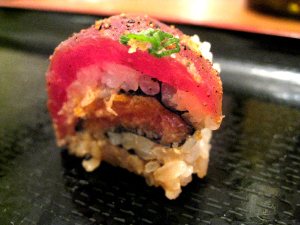 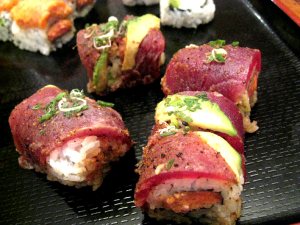 In fact, when one of t:e's readers (thanks DoubleO!) suggested I try the place (I would have never tried it otherwise), he basically said to stick to the sushi.  Good call.

Gen has a pretty big selection of maki, and most of what I've had are really good.  There's a good balance of rice to fish, and plenty of choices to keep you coming back.  Some rolls have real crab, from what I can tell.  Others have interesting spices that lend a smoky flavor (the Crazy Tuna Roll, pictured above).

My one complaint is that they over-process the spicy tuna.  I'm a bit of a purist for the most part, and I prefer my spicy tuna (OK, OK, "spicy" isn't exactly how a purist would order raw fish) to have the texture of chopped tuna, with just a bit of spicy sauce.  Most places don't prepare their spicy offerings this way, unfortunately...which is why I often make my own at home (spicy sauce is just mayo and sriracha hot sauce)

After ordering delivery sushi several times, we decided to try some of their Chinese items.  Big mistake.  I'm not sure what I was expecting, but what we got was run-of-the-mill Americanized Chinese food.   Their version of Kung Pao chicken was exceptionally bad.  A ton of peanuts and sweet, salty sauce.  I just don't get it.  This dish hardly resembles the Sichuan dish that you can find at Grand Sichuan in NYC (and now, in Jersey City!).

The Chinese ribs were described as "not good."  I didn't have any, but I have to think that was a spot-on assessment.  Again, this is an Americanized dish, but there are good ribs, and there are not so good ribs.

There are some fancy "Chef's Selections" on the menu, which seem a little more ambitious, in an Americanized Chinese sort of way, but I've yet to try them as none would travel well (crispy fish and whatnot), and I'm not about to go to the place to order them.  Oh who am I kidding.  The chef is from Mr. K restaurant in NYC, which I assume was one of those midtown-y banquet-y type of places like Chin Chin and Shun Lee, and this stuff is just going to be pretty bad as well.

On a positive note, they have a database tying your phone number to your address, so you don't have to go through that whole song and dance of explaining where you want your food to go (if it's delivery, of course).  The people manning the phones are always nice, and there are rarely communication issues.

Stick with the sushi at Gen.  And if you have kids, maybe they'll like the Hibachi.  Try the grilled duck if you go, and let me know how it is.  The picture on the menu looks tasty.  But for all of that hibachi and Asian business, as far as I'm concerned, Ridgewood has another pretty good option for sushi.