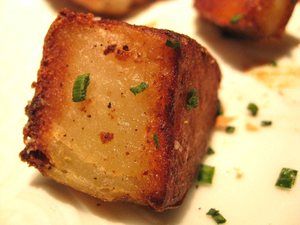 Do you like roasted potatoes but find that you don't have time for a proper roasting?  Don't answer because I don't really care about you.  The important thing is that I sometimes don't have time to roast "off" potatoes, and other times it kills me to use that much energy to cook a few potatoes.  So I often opt for pan roasting.

A little balance and technique doesn't hurt here, otherwise you'll end up with burnt, raw potatoes.  I've found that if you give the (non-stick) pan a fair amount of EVOO, throw the potatoes in and cover them, the moisture from the potatoes will effectively steam them while they're getting ready to brown, and in no time at all you'll have some great roasted potatoes. 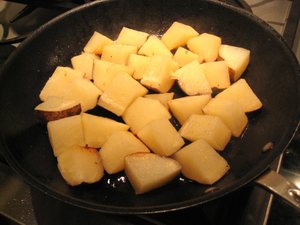 Start with a couple of regular ol' baking potatoes from your favorite fly-over state.  One potato per person.  I leave the skins on.  Skins are damned good, both on the potato and off.  I start with the skins down, because they're tough and can stand up to the initial cooking.  Starting out on a med-high heat gets things going nicely.  Lid on, of course, in case you missed that part. 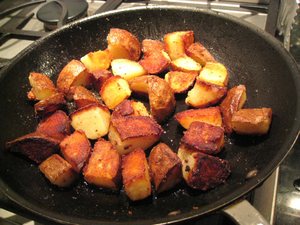 After, what, 10 minutes with the lid on, skins will be browned and the potatoes will be just about done.  At this point I give them a flip to get the fleshy part part down for some browning, sans lid.  Brown all around.  It doesn't take but a few minutes.

When they're nicely browned, lower the heat, and viola:  the potatoes kind of suck in that oil.  This is a good thing.  Trust me.  If you don't like for the EVOO in your potato, making them all luscious and creamy, then by all means take them out of the pan before the oil gets sucked in.   And let me know so I can publicly ridicule you. 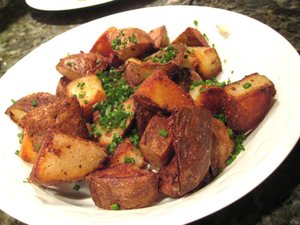 Great for dinner or breakfast as far as I'm concerned.