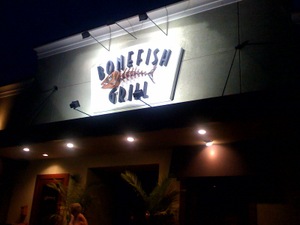 File under:  I should have known better.

Essentially on a dare, we headed to Bonefish Grill in Paramus.  "How bad could it be?", was the rationale.   Well let me tell ya...

When we first sat that the bar, things seemed like they could go either way.  It's a nice big long bar, with 3 bartenders, and there's a basket of limes and lemons back there as well.  Seeing fresh fruit is (almost) always a good sign.  The mere existence of fresh, whole fruit suggests to me that they're using fresh fruit to make fresh fruit juice (lemon, lime, that type of thing), instead of Rose's green sugar water, or whatever it is that comes out of the gun (usually referred to as "sour mix" [shudder], if I'm not mistaken).

Things also seemed like they were moving in the right direction when a margarita was listed on the menu, with ingredients that included "Patron Silver and Citronage, with fresh lemon and lime juice."

"Hallalujeh," I thought to myself.  A restaurant, a chain restaurant no less, that wasn't going to make the standard crappy sweet margarita that you find just about everywhere.  However, given my skeptical tendencies, the inquisition got under way.

I asked if they were really using "fresh lemon and lime juice", as the menu suggests, and not the stuff from a gun, or Rose's or anything else bottled.  The bartender obviously didn't have any idea what she had been putting in the margaritas, so she deferred to another bartender, who didn't know either.  They took the bottle of "juice" out of the fridge, and one tasted it.  "[Puckered face]That's definitely not sweet"  she sputtered.

Things are really looking up, right?  I go on to have a somewhat lengthy exchange with our bartender, excited that they've made the decision to use fresh, unsweetened fruit juices here, explaining that so many places ruin margaritas by putting Rose's in them, or adding the stuff that comes out of the gun.  She seemed to listen to my maniacal rantings, but, I guess, with the benefit of hindsight, just half-understanding them.

I go on to tell the bartender *exactly* what I want.  "I'll have a margarita, Patron Silver, Cointreau, 2-to-1, and just a splash of that lime juice you have.  On the rocks.  Nothing else."

She goes down to the other end of the bar, and comes back with an enormous glass filled with something that is neon green.  Now things are suddenly *not* looking good.  I didn't need to have a sip to know this isn't what I wanted, and to know that this drink would better serve a 22-year-old at Joey Harrison's Surf Club who just got done doing a keg stand, than it would someone who likes the flavor of tequila and doesn't like high fructose corn syrup.  But I took a sip anyway, in the name of science, and to prove that I was right.  And I was right.  Shocking, I know.

I don't normally send food or drink back, but this drink was horrible, and very clearly not what I wanted.  I asked what she put in it, and I don't think she really had an answer.  What I think happened is she spoke to the guy down at the end of the bar, who seemed to be the senior guy available, and he told her how to make a margarita.  Why she deferred to him when I had just explained everything to her is beyond me.  Or maybe she just couldn't break the routine.  She ignored the words that were coming out of my mouth and made the drink as she had been trained.   Trained, by Bonefish Grill.

But that's not why I called this meeting.  I'm here to tell you that the food wasn't very good, either.  The menu reads like something out of the 80's:  egg roll, fried calamari, bacon wrapped scallops, coconut shrimp.  A frat-party beer selection on tap (with the exception of one, whose name I forget).

For our part, we endured the following:  sweet and soggy "bam bam shrimp", or "bang bang shrimp", or some such nonsense.  "It has a kick", we were warned.  No it doesn't.  Tuna tartare that had an odd texture.  The tilapia was aggressively seasoned and perfectly acceptable.  And a completely and utterly inedible "ceviche", which seemed to be made with some sort of medicinal juice concentrate mixer, like something they'd put in a margarita.  Unbelievably horrible.

File under:  I should have known better.

Essentially on a dare, we headed to Bonefish Grill in Paramus.  "How bad could it be?", was the rationale.   Well let me tell ya...