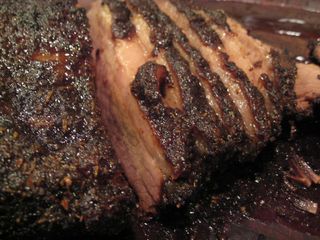 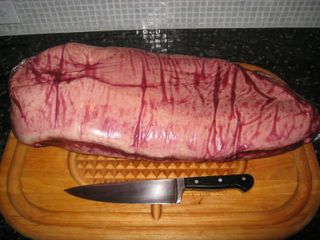 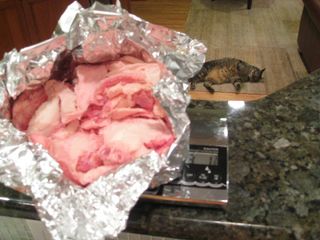 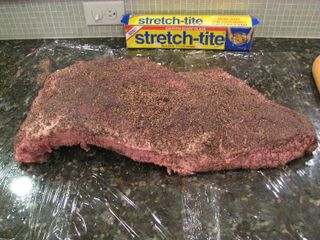 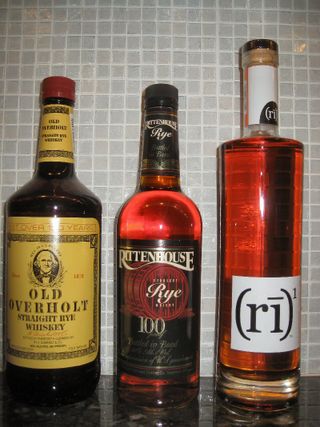 Did you wake up this morning thinking "damn, I wish I knew of a place around Bergen/Passaic counties that stocked a bunch of rye whiskey."  No?  Well I sure did.

The only rye that I've been able to find 'round these parts has been Jim Beam.  It's a fine product, I'm sure, but I'm looking to branch out a bit.

A few hours later I found myself at Shoppers Vineyard in Clifton.   And holy moley. 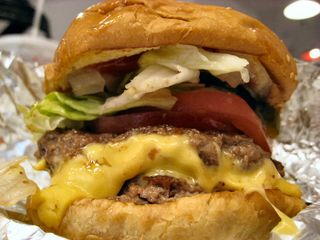 Another joint where the hype outweighs the food.

There's no doubt that this is the type of burger I should like:  fresh ground beef (although, I'm not sure if it's freshly ground), that whole roadside stand style of burger that I love (messy, wet, etc).  Hell my first hopes that were it would be a more accessible Shake Shack burger (although I need to get back to Shake Shack to make sure that I actually like their burger...I'm sure I do, as Danny Meyer is no slouch).  And I do like it, but come on, it's not all that exceptional. 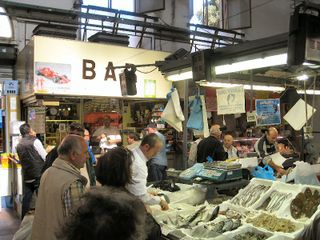 When I first heard that Clifton's Corrado's was opening another store in Wayne, and the excitement generated by this prospect, I was nonplussed.  Corrado's in Clifton has never really impressed me.  It always seems crowded, and not in an exciting and energetic open air market in Civitavecchia where I can grab a beer at the market bar to take a break way, but rather in that get-me-the-eff-out-of-here way.  I suppose the prices on the produce are good, but the savings aren't worth my time, digging through the less-than-fresh-looking stuff.  It is what it is, but I've not found much reason to go.

However, it's a new day, and there's a new Corrado's in Wayne, and on my first visit all I could say was "WOW!"


Firstly, the place is spacious and a pleasure to move around in.  It's bright.  It's clean.  There were an adequate number of checkout lanes.  And it has everything.  In fact, I made it a point to make a mental note to myself:  "Note to myself:  this place has everything.  If you ever need something, and don't know where to get it, it's here.  At Corrado's.  Dried chiles.  Pork skin.  Pork belly.  Dry-aged beef.  Prime beef.  Olives.  Cheeses.  Sausage casings.  Chipotle in adobo.  Fresh mozzarella.  Mozzarella curd.  Pork butt.  Italian bread.  Chicken feet.  Ox tail.  French bread.  Desserts.  Sandwiches."


The list goes on.  The place could very well have the most comprehensive inventory of interesting and hard-to-find foodstuffs in all of north Jersey.


Want a huge chunk of provolone for 55 bucks?  Here is is. Need pork belly?  They've got lots of it.  Although the skin still had whiskers. 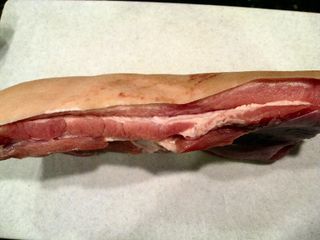 The dry-aged beef is supposedly USDA Prime.  At about 20 bucks a pound, it's a good value, and certainly in line with Franklin Lakes' Market Basket's pricing (an obvious competitor). 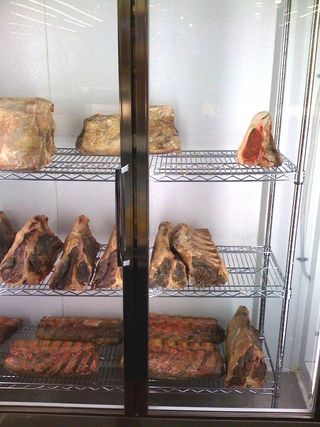 The non-dry aged beef (about 14/lb IIRC) looked excellent, and had nicer marbling than the dry aged stuff I got.
And most notably, the produce looked really fresh and in good shape.


As an aside, I realized that if you're serving steak and potato and greens, and you're pre-slicing the steak, it's easy to just serve everything on the board, instead of dirtying more plates. 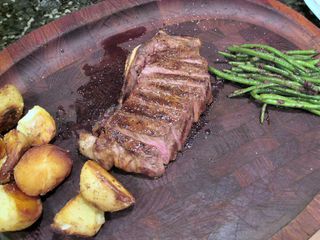 As another aside, I did a side-by-side taste test of Corrado's San Marzano DOP tomatoes and Cento organic, and the Cento was the clear winner.  I have a feeling both would lose if up against Muir Glen, which I feel are some of the best canned tomatoes out there.  A reminder to taste your ingredients!!! 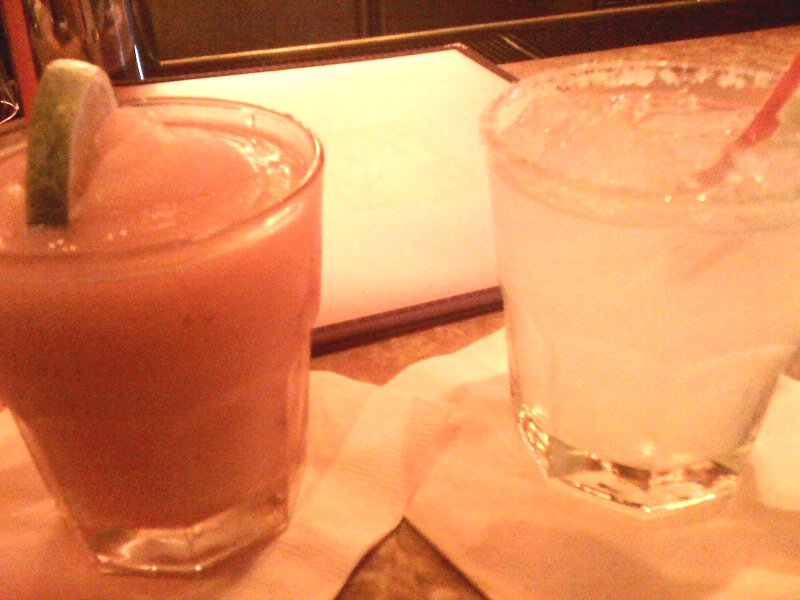 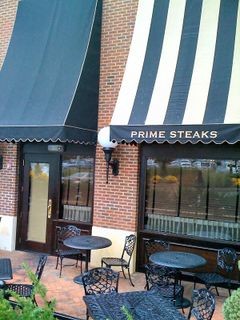 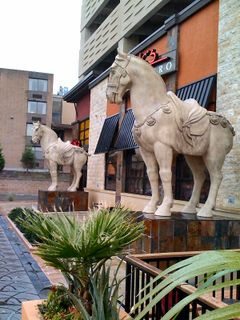 Do people actually go to restaurants without first consulting with their website?  I sure don't.   And judging by the lack of info on the internet in general about this restaurant a lot of other people don't, either.

I guess they're tring to keep the place a secret-secret.  I hope that works out for 'em.

Blend opened up several years ago, taking up what seemed to be an entire block of Ridgewood's somewhat quaint downtown area.  Then it closed a few months ago, bankrupt.  But not before I spent some quality time at this restaurant-cum-dance-club-cum-live-music-venue.

During one of my first meals, on what was a guys-night-out sort of thing, my strip steak came to the table in the form of filet mignon.  I sent it back and waited.  And waited.  The manager, who was very nice, came over and apologized, explaining that they had my new steak ready and were bringing it out but the server dropped it on the stairs, so they were making yet another one.  I appreciated her honesty, we all had a good laugh, and we still chuckle about it today.  The steak?  I don't recall it being notable in the least.  But a good time was had by all.

On another visit, I spent a lazy afternoon at the back bar talking to the bartender (Steve, at the time), about cocktails and tequila.  He set up a little tequila tasting for me, and we had a grand ol' time.  The burger, not all that exceptional.  But the experience?  Wonderful.

But beyond those two visits, Blend just didn't do it for me.  The food was simply not very good.  And if I went at night to soak in that nightclub thing they had going, I'd find myself looking around, wondering who all these people were and from where they came.  They sure didn't look my neighbors and friends.

That was indicative of my biggest issue with Blend:  it didn't serve the community. And to top off the perceived insult with tangible injury, its valet service seemed to take up about 90% of the only large parking lot in downtown Ridgewood.  Pre-Blend-opening, you could always get a spot there for 2 bucks for the whole night.  In a post-Blend-opening world, that parking lot was practically useless...unless you were going to Blend.  Or should I say, unless you were pretending as though you were going to Blend.  Many a time I would drop off my guests at our restaurant of choice, pull into that valet lot, hand over my keys, walk in the back door of Blend and right out the front.  2 dollar parking just turned free.

But my craftiness isn't what I came here to share.