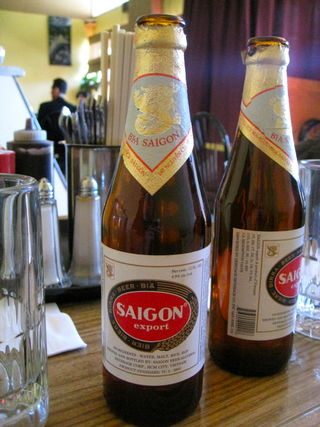 A couple of commenters on this BOM (blog o' mine) have been mentioning Spring Valley's Vietnam restaurant for some time now.  It's been on my list, and we finally took the drive up to see what all the fuss was about. The fuss, it was merited.

I generally try to come up with an angle or a point or a story for most of my posts here, because unlike too many blogs, I'm can't see how there's anything interesting in looking at pictures of every morsel of food that ever enters my face, with dynamic commentary like "we had the pork chops and they were great!", so readers can comment back ":drool:"  In fact, I wouldn't approve a comment that says ":drool:" on principle.  But for this post, there's no angle.  The only story is that it was a real pleasure eating here.  (ah-HA! There's the angle.  This blogging thing, I'm excellent at it.  Someone should pay me.)
We only ordered 3 dishes, but based on what we had, the food was really quite good, and compares favorably with Montclair's Little Saigon.  That's high praise.  In fact, the rare beef pho was one of the better versions that we've had.  Maybe not as deep and flavorful as Little Saigon's version, but certainly a worthy contender. 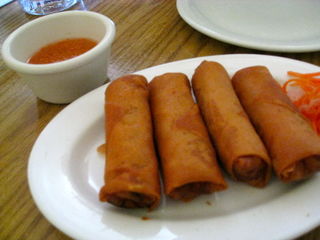 Egg rolls!  I somehow managed to focus on the table just past where the dish was.  I told you no one comes here for the pictures 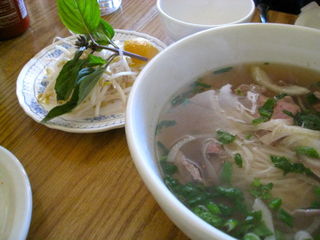 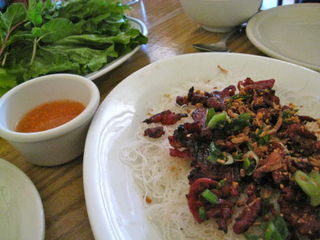 Pork, vermicelli, wrap it in lettuce, dip in the fish sauce.  Yum, o
This shoebox of a place looks like what I'd imagine a similar place in Vietnam to look like.  It's really bare-bones.   It's in a strip mall, and even the window configuration makes you feel like you're in a foreign country. You know what I mean.  It was just odd.  You know how things in other countries look really familiar, but they're just a bit "off" in some way but you can't quite put your finger on it?  Canadians, for example. And the windows here.
Where Vietnam trumps Little Saigon is in the service department.  Little Saigon has some horribly slow service.  But the young man who waited on us at Vietnam was attentive, friendly, and speedy.  A real pleasure I tells ya.  What more can you ask for. 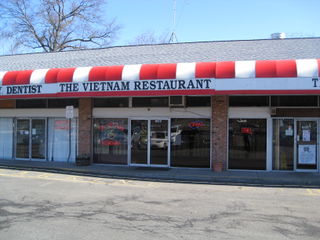 They sell beer, with more than a couple of Asian selections (Thai, Chinese, and Vietnamese), and I'm told you can bring your own wine.  Well that's mighty nice.
So if you're looking for some Vietnamese in north Jersey, take a quick drive up the Parkway to Vietnam.  You'll be there before you know it, and I guarantee you'll be back.
The Vietnam Restaurant : 304 A North Main Street : Spring Valley, NY : 845.425.7446

A couple of commenters on this BOM (blog o' mine) have been mentioning Spring Valley's Vietnam restaurant for some time now.  It's been on my list, and we finally took the drive up to see what all the fuss was about. The fuss, it was merited.