Home Archives and Categories RSS Feed t:e map Restaurant Photos About
Steak Paradises: A Second Helping: On the Travel Channel
Do you: subscribe to the Bergen Record?

Updated with results of cooking an actual pizza... 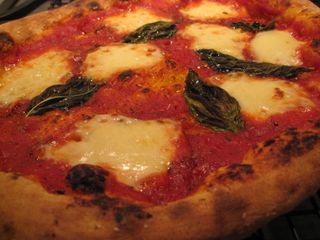 I've been wrestling with various approaches to getting high temps in my oven, which might approximate those of a wood-fired brick oven.  For Neapolitan-style pizza, obviously.

Some of the methods have been relatively successful, and I'll be sharing those with the class soon.
Yesterday's experiment didn't go so good, though.
My cohort in blogging over at iamnotachef.com suggested that I try using my grill to achieve the temps I'm looking for (he actually called it "your turbo-charged grill", I believe as a subtle jab at the fact that I spent way too much money on something which essentially burns propane).  A while back, I tried using my Weber for pizza, configured with multiple stones, and bricks and stuff, thinking along the same lines, which I documented here.  It was somewhat successful, but a pain in the ass.  Bricks and pizza stones are heavy, and hot.  I figured I'd try a new approach. This time, I just laid out some ceramic tiles on the grates, but instead of messing around with a stone to make the "dome", I just threw an upside-down aluminum pan over them (similar to my smoking-on-a-gas-grill experiment, which was somewhat successful), just to see how hot it would get under the tin hood.  I wanted to create a little heat-filled chamber, and wasn't too concerned with any sort of reflective heat coming from the top.  I'm hoping that radiant heat, like from a stone above the pizza, or a dome in an oven, isn't really necessary to cook pizza quickly.  I'm hoping that hot air is enough.
I stuck my handy Thermapen into a hole in the pans, and watched the reading jump from 68 all the way up to about 400 degrees.  It was jumping in 10 degree increments, trying to get a read on the obviously hot air.  And then I smelled something funny, and then I burned my finger, and then I recalled the cost of a Thermapen, and then I said "shit". 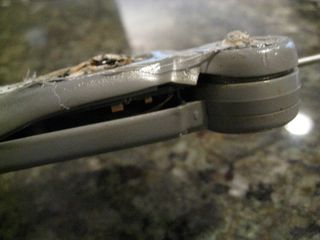 Apparently plastic melts when in contact with a hot grill.  Expensive plastic melts, too.
I was still determined to get a read on the temp in the chamber.  Finally, some common sense made its way into my brain, or, I suppose, out of my brain, and I simply plopped an oven thermometer on the tiles, under the tin hood.  The reading was up over 550 and then all the way back to zero.  Well past the 550 upper limit on the thermometer.  Methinks it got hot in there.
Soon, I will put some actual food in there, and we'll see where we land with this one.  Maybe then I'll write a post where I actually say something.  You can hardly wait.
UPDATE:
OK, so while the Thermapen cooked quite nicely (and quickly), the pizza wasn't as successful.
As I suspected, the stone got too hot, and the tins didn't hold in enough heat to cook the top of the pizza. 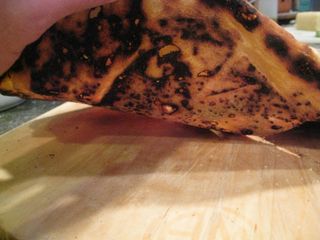 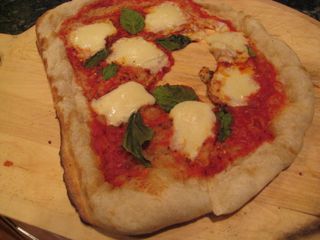 While the bottom appears burnt, it wasn't all that bad.  But again, there wasn't enough heat to really cook the top (and the dough stuck to the stone and ripped, as is evident in the picture above).
So, it looks like it's back to the oven for me.  Messing with the broiler and stones and tiles and whatnot. Perhaps some day I'll just build a wood-fired brick oven and be done with this nonsense.

Updated with results of cooking an actual pizza...

I've been wrestling with various approaches to getting high temps in my oven, which might approximate those of a wood-fired brick oven.  For Neapolitan-style pizza, obviously.

Some of the methods have been relatively successful, and I'll be sharing those with the class soon.
Yesterday's experiment didn't go so good, though.