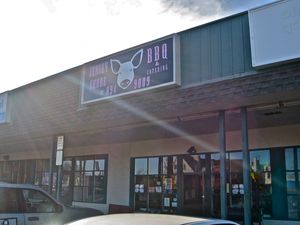 Jersey Shore BBQ does not suck.

A beautiful Saturday morning came around, and rather than do something healthful like going hiking at Harriman Park, we figured our time, and the glorious sunny day, would be best spent eating BBQ.  We were right.

There's an awful lot of awful BBQ around, which is why we avoid most.  You know the places.  They aren't using wood, they're par-boiling ribs, their meat is tough and dry, the sauces are as sweet as candy.  On top of that, most people don't have a very developed taste in BBQ.  So even raves reviews from those Yelpers and Chowhounds on these places doesn't add up to a crock of baked beans in my book.  And since my (current) favorite style of BBQ is Texas Hill Country BBQ, and Jersey Shore BBQ makes claims of serving Texas style BBQ, we were determined to give them a try ourselves.

The first thing I noticed as we pulled into the parking lot was "eff me that was a long drive."

The second thing I noticed was that the place isn't on the main street, where I had expected it to be; it's on an interior parking lot of that plaza they have down there in Belmar.

The third thing I noticed was the liquor store right there across the parking lot.  I like beer with my BBQ, and JSBBQ is BYO.

The owner and pitmaster Doug was on hand to serve us, and indulge me with answers to my endless barrage of questions.  Normally I don't grill restaurant owners and chefs, but if the chef's available, and it's a subject in which I am immensely interested (BBQ, in this case), and they are open to discussion, you can bet I'll be asking questions about wood, cooking times, cooking temps, pits, sauces, rubs, etc, etc, etc. In fact I've found that most chefs and owners and servers who care about what they are doing will talk your ear off if you want.  I've had more tours of kitchens and samples of something they're trying out and spur-of-the-moment wine tastings than I can remember, simply by showing interest.  And it's not because I have a blog, which they tend to not know.  It will happen to you, too, if you are into that type of thing.

Here's the rundown of our lunch at JSBBQ:

Brisket - Brisket, along with beef ribs and sausage, defines Texas Hill Country BBQ to my mind.  It's somewhat difficult to get right (it's usually too dry), but the brisket at JSBBQ is quite good, and perhaps the best I've had outside of Texas, with only Hill Country in NYC as the front-runner.  JSBBQ is serving slices which include both the point (fatty) and flat (lean) parts of the brisket, which makes for a nice balance of fat and meat.  This is how I've seen it done in Texas.  I've served the point on its own, and while it's decadent, it's almost too rich.  Having the lean portion of the brisket in the same slice as the point is the way to go.  The brisket had a very simple rub of what I assume was just salt and pepper.  Very subtle.  I would have preferred more black pepper, but that's a personal preference. 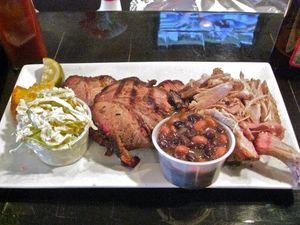 At service they throw the brisket on a grill, hence the grill marks

Pulled pork - Nice bark, moist and porky.  I ordered mine without sauce so I could taste the smoke and rub.  The apple smoke was subtle (as it was on all the 'cue).  At first I thought there was no bark in the serving, which would have been a let-down, but then I discovered it on the bottom of the pile.  I would like to see this mixed in with the meat more, but I was able to mix it up myself.

Baby back and spare ribs - I was surprised at how not sweet the rub was.  In fact, I'm not sure there was much sugar at all in the rub.  These ribs definitely reminded me of the pork ribs that I had in Texas.  The spares seemed to have more flavor (I do think they are fattier in general, so that makes sense).  They were trimmed tightly to a St. Louis cut, which means they didn't have the big flabby gristly end.  That end is great, don't get me wrong, but it's sometimes challenging to get that thick part of the rib cooked at the same rate as the narrower leaning end.

Corn bread and baked beans and cole slaw and mac&cheese - All very serviceable.  The cole slaw was nice and acidic.  The corn bread wasn't overly sweet. The baked beans have a mix of beans, and aren't the sweet and mushy beans that you find too often.

Jersey Shore BBQ offers two BBQ sauces, and they're on the table for your saucing pleasure.  They've got a vinegar sauce, and a tomato-based sauce which leans toward the vinegary end of the spectrum.  Doug mentioned that the tomato-based sauce recipe was basically the first one he landed on.  He tried to tweak it over time, but always fell back to that original recipe.  It's a good feeling when you step in shit on the first go.  I enjoyed them both.

The one thing that you'll definitely notice is that there really isn't much sugar in the BBQ or sauces here.  I suspect that rather than covering up the meat and smoke, JSBBQ wants to let those meat flavors shine through, and simply compliment those flavors with sauces and smoke.  In fact this one visit is making me rethink my sauces and rubs...which means I'll be going back to the drawing board.

Now if we could get them to serve beef ribs and sausage...

Jersey Shore BBQ does not suck.

A beautiful Saturday morning came around, and rather than do something healthful like going hiking at Harriman Park, we figured our time, and the glorious sunny day, would be best spent eating BBQ.  We were right.