2011: Tasty reasons to be thankful 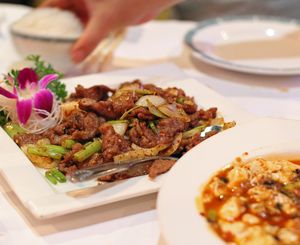 We here at t:e headquarters are very thankful for everything at Chengdu 23.  Even the dopey flowers.

2011 wasn't a terribly active year in t:e posts, but make no mistake, food was eaten, spirits were stirred, and finds were found.

Looking back at the past year, here are some things that the t:e army of editors is very thankful for...

I'd been to A&S a handful of times, usually just for a sandwich.  Recently, however, I noticed a handwritten sign, noting that they carry some stuff from NYC's Salumeria Biellese.  I talked with the fellas about these products, and before you know it they're showing me the stuff they make there themselves.  Lardo, guanciale, salami, all sorts of charcuterie.  I asked the kid where he learned his craft, and his answer warmed my loins:  "by paying attention to the old-timers, reading books, anything to learn."  We need more of this.

Oh, and they also get bacon from the same folks who make (or perhaps supply) the bacon for Peter Luger.  Which means I'll be eating more bacon in 2012.  That's a proper resolution right there.

I can't pronounce this.  So I call it "that bakery in Ho-Ho-Kus."

I'm thankful that these folks are making biscotti.  I'm also thankful that the guy offered to make 2 hamburger rolls for me, since they had run out earlier in the day.  I've not had the chance to make too deep a dive into their stuff, but I get the feeling it's made with passion and consideration.  We need more of that.

I'm thankful Radicchio is no longer around, somehow continuing to convince people that it is good, and that a 30 item list of specials that are not written down and are recited without prices is acceptable in any universe, and probably more importantly, convincing people that it's OK to use a possessive "s" for a restaurant that's not named after a friggin' person.  <mini-rant>Saying things like "Radicchio's" and "A Mano's" makes you sound foolish</mini-rant>

While I'm not convinced they even have a tandoor at this place (what's with the sizzling platter for the tandoori meats?), the place smells like heaven, and a recent curry was quite good.  And they also have a version of fried cauliflower with ketchup, and there cannot be anything wrong with that.

I'm thankful Philadelphia is so darned close, even if I have largely ignored it. I'm also thankful that It's Always Sunny in Philadelphia exists.  Two trips to Philly this year reminded me of what a fool I've been for not giving our neighbor the brotherly love it so greatly deserves.

Places like Johnny Brenda's, a restaurant/club/bar focusing on local craft brews, simply prepared foods from fresh, local ingredients, in a down and dirty artsy setting with record spinning DJs and a pool table, fill my spirit with glee. 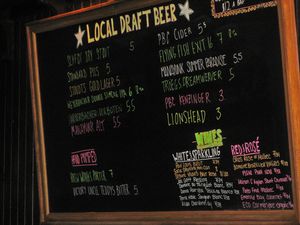 Any of "celebrity" chef Garces's restaurants are probably going to please.  It turned out that we ate at four of them without even realizing that they were all under his umbrella.  We particularly enjoyed Village Whiskey and Amada. The restaurants are beautiful and energetic, and worth a trip themselves. 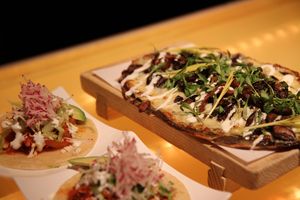 Tacos and flatbread at Distrito 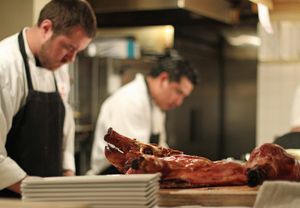 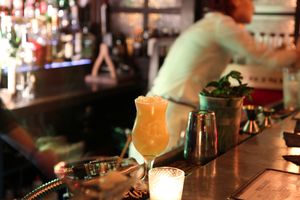 My well-crafted cocktail at Village Whiskey

I'm thankful Eastern State Penitentiary is so freakin' awesome, and right across the street from Jack's Firehouse. 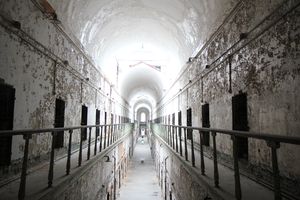 The folks at Zavino Wine Bar Pizzeria are not only making some very good Neapolitan-style pizza (even if they're cheating by using gas), they are also quite friendly.  Go there.  Now. 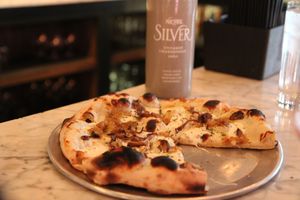 I'm thankful I was able to drink much sparkling wine in Bairrada (along with eating much suckling pig).  But I'm not thankful that it's not readily available here in NJ.  I'll keep looking. 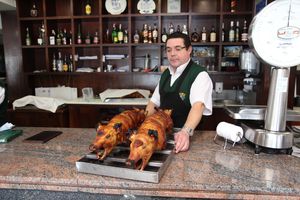 I'm thankful I discovered yet another way to enjoy raw fish.  Hawaii is a beautiful and magical place, with a healthy food tradition steeped in its eastern asian roots.  Where else in the US are you going to find a mashup of culture with roots in China, Japan, the Philippines, Korea, and other places that I don't even know exist? 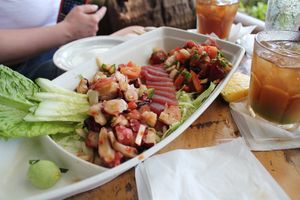 Poke at La Mariana Sailing Club, Honolulu.  Don't be thrown by the kitsch of the place. This poke is no jokey. 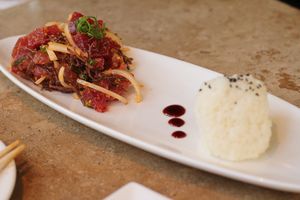 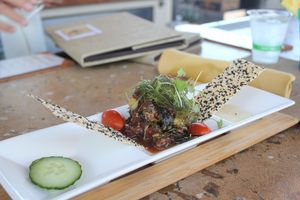 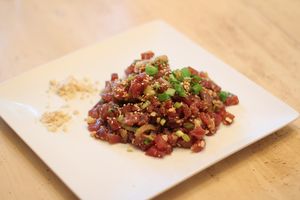 The tomatoes at Varka : Ramsey, NJ

I'm very thankful that I ate that entire plate of tomatoes at Varka this summer.  They were exceptional. 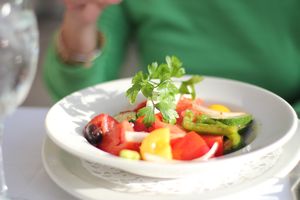 A great rye at a great price.  Drink more Manhattans. 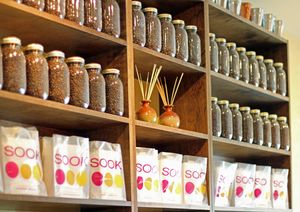 Very thankful for the olives and pickles at Fairway. I'm also thankful they put out bits of bread and olive oil samples, as it's endlessly fascinating to watch people make a meal of it.  People who can clearly afford a loaf of bread.

Thankful we have a top-notch fish monger in the area, where you have access to what the best restaurants are getting.  A store you can trust. 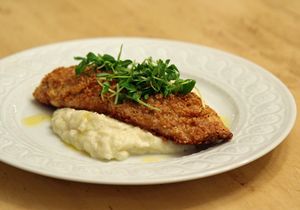 I first noticed Andrew up at the Porterhouse in Montvale. Back then I noticed a young, energetic and seemingly ambitious fellow, and I admired his work, even when it involved not much more than pulling beers and pouring wine and making some small talk.

Fast forward 4 years, when I recognize, from *somewhere*, a young, energetic and seemingly ambitious bartender at the newly opened Park West Tavern, and we both brainstorm to figure out at which of the thousands of restaurants and bars that I've found myself in over the years I might have bumped into him.  It finally came to us.  <fullDisclosure>Andrew at that moment also realized that I have this blog, as he saw that post about the Porterhouse when it was first published.  Introducing myself as 'tom' sort of solidified his suspicion.</fullDisclosure>

But none of that is important right now.  What's important is that over the past 4 years, both Andrew and I have independently come to embrace the "cocktail culture," as the nerds call it, and thankfully he's injecting that culture into little ol' Ridgewood...a town which for years had only 3 of what have to be the shittiest bars in all the land.   I won't mention them by name McMurphy'sTheOfficeSmithBrothers.

Andrew brings in bitters, makes drinks with juice from actual fruits, invents cocktails, interprets classics, and will joyfully talk cocktails with you if he has time (and his time is becoming more and more rare, with the popularity of the place).  For all of this, I am thankful.

Oh, and the food is pretty good.  You can have a good meal here if you order carefully and have your expectations set correctly.  This isn't Peter Luger, and you can probably buy better steaks at any number of stores, but they are decent bar steaks.  The burger is quite decent.  The homemade ketchup is not.

So there you have it.  A bunch of random crap that I remember from the past 12 months.  If I've forgotten anything, do let me know.

2011: Tasty reasons to be thankful

We here at t:e headquarters are very thankful for everything at Chengdu 23.  Even the dopey flowers.

2011 wasn't a terribly active year in t:e posts, but make no mistake, food was eaten, spirits were stirred, and finds were found.

Looking back at the past year, here are some things that the t:e army of editors is very thankful for...