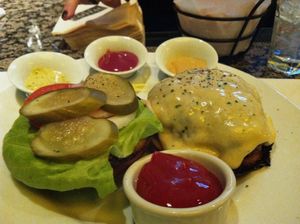 The burger is said to be "infused" with bacon.  This could mean a few things, but in this case it means that bacon (along with onion) is ground into the beef.   The bacon flavor is somewhat pronounced, so if you don't like bacon, you might not like this burger. It works, although somewhat insults my purist views on burgers.  Yet it's hard to argue with results.  So conflicted. Adjusting meds...

The menu states that the burger is "sirloin."  I suspect (and this is just somewhat of an educated guess) that it's not sirloin, but bits of short loin and rib trimmings.  The "sirloin steak" on the menu is actually strip steak, cut from the short loin, not the sirloin.  They don't have any sirloin steak in the house, unless they are buying it strictly to grind it.  While I know the term "sirloin" is often used to describe the strip steak, I don't think it's accurate, and it's annoying, since I have to ask specifics about the steak to understand what it is I might be ordering.  <additional ranting>And don't get me started on the "Delmonico Sirloin Steak" at Park West Tavern in Ridgewood, NJ.  Is it rib steak?  Is it strip steak?  Is it sirloin?  C'mon.</additional ranting>

I also suspect that none of you people care about that, as well you shouldn't. Adjusting meds again...

The bacon is obviously adding fat to the mix, and the burger is exceptionally juicy.  Probably the most juicy burger I've had in recent memory.  The Capital Grille grinds their meat on premises.  From what I understand, the Capital Grille does a whole lot on premises, including dry-aging their primals.  They also get and break down whole fish.  You don't find this type of approach at local restaurants much less chains.  Good for them. 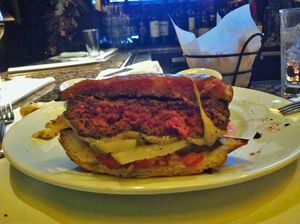 Capital Grille burger cross-section, upside down, as burgers should be eaten

This burger is probably about 9 or 10 ounces.  The toasted bun is perfectly suited to the burger's heft, catching much of the juice that tries to escape, and isn't too buttery or sweet, as brioche can too often be.  I did, of course, have to gut the bun to get the proper ratio, but that's almost a given. Thick cut juicy pickles, some raw onion, a not-horrible-tomato, and pleasantly gooey melted cheese topped it off.

The fries that come with the burger are of the truffle oiled variety.  I'm no fan of truffle oil, and the restaurant was more than willing to sub regular fries.  The fries are in the McDonald's style (that's a compliment) and nicely done.  Nothing mind blowing, but quite good.  And not a hint of truffle oil in my order.

Not burger-related, I recall another visit about a year ago, when I was not completely blown away by the steak.  They are dry-aging for about 14 days here.  That's not a whole lot of time, given that many places go for twice as long, but I think I'll revisit the steak at some point.

Big, expensive chains like this seem to be very well run.  This becomes evident if you talk with the staff.  They are obviously well-trained, and are of a calibre fitting of the price point.  Friendly, efficient, and seemingly excited to be working at the place.  That's all great in my book.

The beer list (all bottles, I believe) borders on embarrassing.  The selection of wines by-the-glass is serviceable.  I'm guessing their list of bottles is broad and deep.  They've got a properly stocked bar, including orange bitters, and I believe they have fresh fruit juices (although I need to confirm that one lazy afternoon).   Other than that pathetic beer list, definitely a step up from most independently owned places in the area.

If The Capital Grille had a great beer list, this long, comfortable bar could really be a destination.  Short of that, it's a damned pleasant place to get a very good burger with great service.

The Capital Grille : Garden State Plaza : Paramus, NJ (and other locations near you)

The burger is said to be "infused" with bacon.  This could mean a few things, but in this case it means that bacon (along with onion) is ground into the beef.   The bacon flavor is somewhat pronounced, so if you don't like bacon, you might not like this burger. It works, although somewhat insults my purist views on burgers.  Yet it's hard to argue with results.  So conflicted. Adjusting meds...