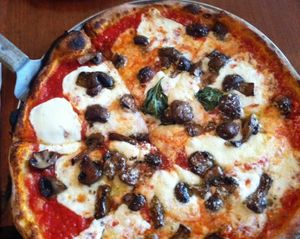 t:e field reporter jimmy:rocks has been telling me about this Mancinni's place for a while now.  He's been making some outrageous claims about how good it is. I didn't doubt him too much.

Knowing t:e reader 'Curlz' enjoys good food and the Montclair area, I gave her the heads up on this BYO pizza joint.  She gleefully reported back on how good it is. I now have no doubts whatsoever that this place is worth a trip.

One day 'Curlz' and jimmy:rocks, who don't know each other, ended up sitting next to each other at Mancinni's and chatting, unaware of the common link.  I guess they go often.  This was on the day after they apparently just missed each other at Pizza Town in Elmwood Park.  Yet another time Curlz reported that she ended up sitting next to longtime t:e friend Rosie Saferstein of NJ Monthly.  All of this is becoming too much for me to process.

Unfortunately I haven't had a chance to get down to Mancinni's myself.  My pizza obsession will get me there soon.  But, I think the word needs to get out, so I present to you the first official t:e guest blogging, by Curlz, on Mancinni's.

Curlz, take it away!

Porterhouse for two at Wayne Steakhouse

I prefer Peter Luger's style of cooking/aging steak over any other.  You can keep Sparks, Ben Benson's, The Palm, and all of the rest.  When I want a steak dinner, I want a Peter Luger steak dinner.  Or, at least a steak dinner at one of the many Peter Luger clones that have been popping up over the past 8 years or so.

First was Wolfgang's.  You remember the story.  The maitre d' from Luger ventured out on his own, basically taking the menu (and probably some trade secrets) with him.  The results were stellar.  I could now get my Luger fix on Park Ave in midtown Manhattan, instead of having to cross over one of those bridges over there.  Not long after that, Ben & Jack (musical website alert) pulled the same move, much to my pleasure.  Each of those restaurants has since expanded into multiple locations, spreading that Luger love. And so on with a few others.

A few years back, someone else defected from Luger and helped open Cliff's Steakhouse right here in New Jersey.  It wasn't as good as the original, or the NYC clones, but it was nice to have an option for that style of steak near home.

Last year, yet another Luger clone opened in New Jersey, this time in Wayne, with some functional outdoor seating I should add. Wayne Steakhouse indeed boasts a very Luger-like menu, USDA Prime dry-aged steak, and cooks those steaks in a similar style.  Is it as good as its NYC cousins? Not quite.  Is it completely acceptable and even a bit exceptional?  I think so. 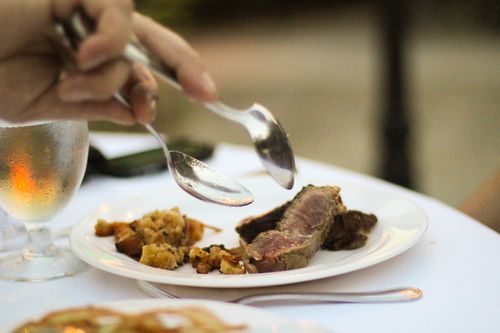 Apologies for the white balance issues