201 Magazine, the big, glossy magazine that you see in grocery stores (or in the mail...they seem to send it to people for free in addition to selling it), released their yearly readers poll. It's sprinkled with "Editor's picks" and "Celebrity picks."  I'm not sure I care what these folks have to say about restaurants, but I guess their opinion is neither better nor worse than that of any random person.

Either way, as usual, many of the restaurant picks are wrong, or just bizarre.

As I sometimes do, I'm going to put on my smug curmudgeon hat and provide the correct answers here, for you.

Best Pizza
201 winner:  A Mano
t:e winner: A Mano.  A Mano is without peers in Bergen county.  They are making Neapolitan style pizza, and no one else is.  It is exceptional. I'm shocked the readers got this one right. 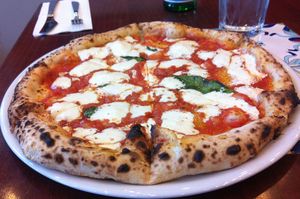 A Mano in Ridgewood

Best Burritos  (Celebrity pick)
201 winner: Tito's Burritos
t:e winner: We don't eat burritos.  They are filled with rice and are just unnecessary. Designed for the undiscerning and budget-minded. Grab a few 2 dollar tacos from Taqueria Brenda Lee in Passaic if you want something interesting.

Best Breakfast
201 winner: Country Pancake House.  Did an editor really write "OMG! This restaurant is unbelievable!"  About the Country Pancake House no less?
t:e winner: We don't go out for breakfast, but if we did we'd go to Raymond's in Ridgewood.  It's a lovely little place, I will confess, as much as I like to make fun of how people line up to eat breakfast food. 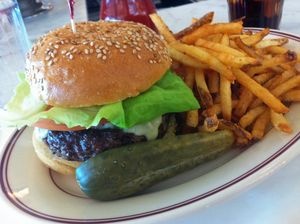 Not breakfast, but the burger at Raymond's.  It's not bad.

Best Burger
201 Winner: Tie between Bobby's Burger Palace and Smashburger
t:e winner: I love Smashburger.  This is the correct answer.  But BuCu should have been tied with Smashburger.  And that's just for that style of burger.  For a heartier restaurant burger, The Park West Tavern in Ridgewood serves a wonderful specimen. 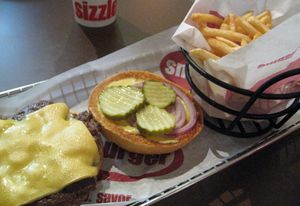 Best BBQ
201 winner: Tie between Cubby's and Bourbon BBQ
t:e winner:  Cubby's doesn't serve BBQ.  They serve braised/grilled meats, with no smoke.  This is not BBQ.  It shouldn't be in this category, and its inclusion does nothing but promote misinformation and ignorance.  Additionally, the correct answer is Fink's.  I haven't been to Fink's new place in Dumont yet, but it's the correct answer.

Best Cheeseburger (Celebrity pick)
201 winner: The Fireplace
t:e winner: The Fireplace burger is simply disgusting (the cheesesteak is disgusting in a delicious sort of way).  Why someone would eat this stuff with Smashburger and BuCu (and Wendy's) within a few miles is beyond me.  It's dreadful. You can't eat nostalgia, and even if you could, it won't be very tasty.

Best Cocktails
201 winner: Four-way tie (what are the odds?) between Bacari Grill, Chakra, Park West Tavern, and Bibi'z.
t:e winner: Chakra has an interesting little cocktail program.  However, they are disqualified due to that smelly refrigerator behind the bar, the one which lets the light of the sun itself flow from it whenever it's opened, which is often.  Bacari Grill gets disqualified because of the neon green cocktail with the neon red cherry shown in the picture, which is exactly what I think they serve.  Bibi'z gets disqualified because one of the partners is just a horror show. He shouldn't be allowed in the restaurant with that attitude.  Park West Tavern is the clear, undisputed winner of the Best Cocktails in Bergen county.  That's that.

Best Social Scene  (Editor Pick)
201 winner: ((Boom)) Burger
t:e winner:  ((Boom)) Burger wins if you prefer your social scene to include a bunch of drunk, young, louts from New Jersey.  It neither looks nor feels like any "club" in New York City, contrary to the claim.  It's suited to those who prefer to wear Giants jerseys and backwards baseball caps.  Which many would say is a better outfit than what I usually throw on when I leave the house. Being anti-social by nature, I really don't know what should win this one.  Hell maybe it is Boom.

Best Drinks with a View  (Celebrity Pick)
201 winner: The Crab House
t:e winner:  Isn't that a chain? Or something?  Do they really have the "best" drinks?  No, of course they don't.  This is what is wrong with America. The view, however, of course, is very nice. Thank you, NYC, for supplying the one exceptional aspect that this restaurant can claim.

Best Wine List
201 winner: Park and Orchard
t:e winner: It's a shame you can't eat their wine list, because little at P&O is worth eating.  Rather than a broad, deep, voluminous wine list (or menu, for that matter), I prefer a wine program with a few well-selected, food-friendly, high value wines.  By the glass. All you need to do to get my attention is have fewer than 3 new world chardonnays.  That at least shows me that you understand that there are other wines out there, and understand that your new world chardonnay drinking customers don't give a crap about which producer or vintage you're pouring.  I see Park West Tavern snagged a runner-up.  That's a pretty good answer.

Best Italian Deli
201 winner: Giovanni's
t:e winner: Without a doubt, A Family Affair in Fair Lawn. It puts Giovanni's to shame. The bread is better, the sandwich construction is better, and the staff is better.

Best Local Coffee House
201 winner: Tie between Cools Beans and Ridgewood Coffee Company
t:e winner: I like the vibe at Ridgewood Coffee Company.  Lots of tats, music, a very casual, counter-culture atmosphere.  I like the open mic night on Wednesdays, which attracts young artists and musicians.  But their coffee seems over-roasted for my taste.  I prefer the coffee at Sook in Ridgewood.  However, Sook is generally filled with a less interesting crowd.  Not a musician in sight from what I can see. So I guess if I'm going to hang out, it will be at Rigewood Coffee, but if I'm drinking coffee, it'll be at Sook.  This is complicated.

Best Sushi Presentation  (Celebrity Pick, from Hell's Kitchen's Chef Dana Cohen)
201 winner: I'm not even sure what this category means.  Isn't this just "Best Sushi"?  Or is the way things look more important.  At any rate, the 201 winner is Masa.
t:e winner: Masa is exceptional.  Sakura-Bana in Ridgewood is as well. For the most part, the rest aren't worth visiting. Even if I didn't agree with Dana's pick, I would say I did, as I must admit I was crushing a bit during Hell's Kitchen. 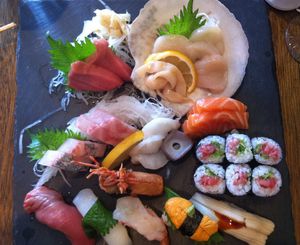 Best Sushi
201 winner: Tie between Golden Dynasty and Flirt Sushi
t:e winner:  I've never been to Flirt, but looking at the picture with that sauce all over that stuff, I have to wonder if they even serve sushi.  Masa, and Sakura Bana, are the winners.

Best Steak
The fact that Steve's Sizzling Steaks is even a runner up makes me question this entire poll. I should have realized that going in and saved myself the frustration of reading this stuff.
201 winner: Tie between River Palm Terrace and The Park Steakhouse
t:e winner: I can't seem to find the level of Prime dry-aged steak that I enjoy around these parts.  But I have to say, for my money, when I'm in the mood for a non-dry-aged steak (and possibly not even Prime), I grab a "bar steak" at Park West Tavern.  They are consistently cooked to temp, well-seasoned, and just an all around very good bar steak.

There were other wrong answers in the poll.  Some, maddening. Others, not as egregious. But my bad mood is wearing off, so I'm done here.

If you'd like me to tell you that you're wrong, please disagree with me in the comments below.  Thanks in advance.

201 Magazine, the big, glossy magazine that you see in grocery stores (or in the mail...they seem to send it to people for free in addition to selling it), released their yearly readers poll. It's sprinkled with "Editor's picks" and "Celebrity picks."  I'm not sure I care what these folks have to say about restaurants, but I guess their opinion is neither better nor worse than that of any random person.

Either way, as usual, many of the restaurant picks are wrong, or just bizarre.

As I sometimes do, I'm going to put on my smug curmudgeon hat and provide the correct answers here, for you.