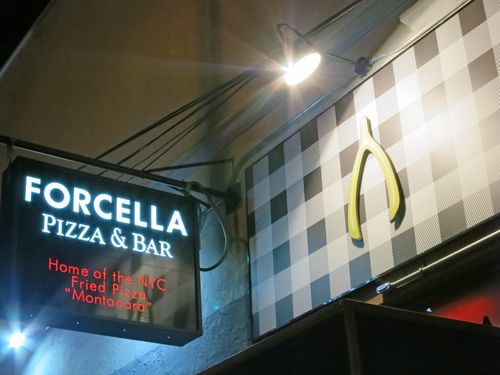 I had read about Forcella a while back. It was pretty clear that this is Neapolitan style pizza and therefore right, up, my alley. Additionally, I came to learn only shortly before our visit, they serve montanara:  fried pizza.  I hadn't until then had the chance to try montanara.

Of course, I we can get montanara without crossing all of those bridges and rivers.  A Mano, in Ridgewood, NJ, serves montanara occasionally, IIRC. And Don Antonio, opened by Roberto Caporuscio, who opened Keste in NYC, and A Mano before that, also serves it.

But first we were going to try the baseline. A margherita pie. Or more specifically, the Margherita Extra, which includes bufala mozzarella.  Bufala mozzarella is almost always preferable.

I think I'm supposed to talk about what the restaurant looks like and post pictures of the interior and other diners and stuff.  But I won't. 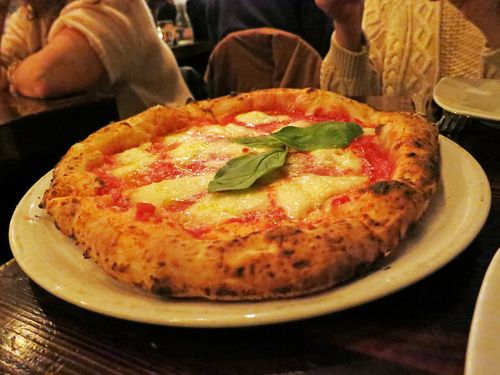 The margherita came out of the obviously very hot wood-burning oven quite quickly.  It was tough to time, as I didn't have any clear line of sight to the kitchen, but based on what I was observing, it was well under 2 minutes. This was a glorious version of Neapolitan pizza. 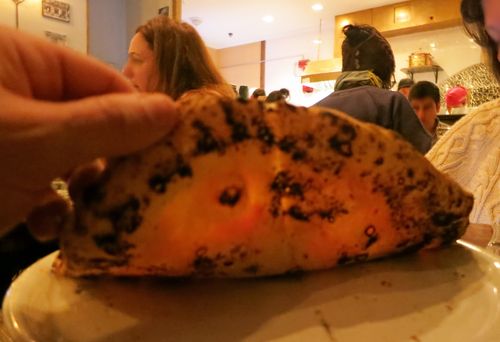 It was dark and I only had a point-and-shoot. Deal.

The crust was soft, pillowy, chewy, and charred just enough. The cheese had just started to melt into the simple, bright sauce.  More EVOO than I'm accustomed to provided an additional level of complexity. Nice leoparding on the crust. This was a fine pizza, indeed. If I have one complaint, and of course I do, and it's perhaps simply a matter of preference, but I think the basil should go on before baking, and not when serving. To my mind there's a missed opportunity to get those oils from the basil into the sauce. Not to mention cooked basil is easy to eat on a pizza, whereas raw basil needs to be cut.

The montanara, on the other hand, was not necessarily my cup of tea. 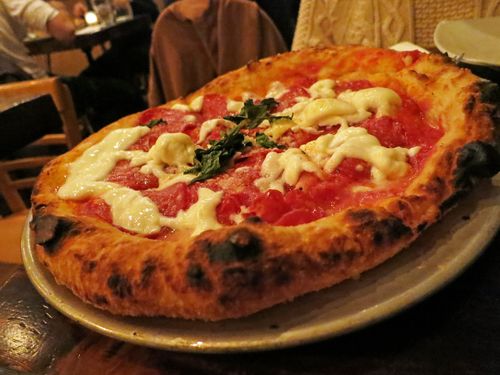 From what I could see, they fry the dough for what appeared to be more than 2 minutes, then they top it and throw it in the oven for finishing. There are a couple of drawbacks to this approach.

First, the cheese doesn't have ample time to melt, at least on mine. The cheese and the sauce don't get a chance to commingle and create the texture and flavors that I enjoy so much in Neapolitan pizza. 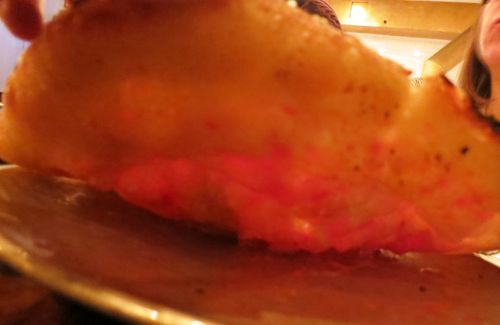 Yo where's the char?

And then there's the crust. The dough almost tasted sweet. It could have been just an impression. A trick on the mind. Perhaps the lack of charring on the undercarriage, which would add a touch of bitterness, led to the impression that this was a sweeter crust. The texture was somewhat odd as well, being a little crispy and doughy, sort of like churros.  Or maybe those coated french fries that you'll sometimes see. Jeez I made it sound horrible.

Overall the montanara didn't do it for me. That's not so suggest there's anything wrong with the version at Forcella, it's just that I didn't care for it.

On the way back to Jersey the following day, we stopped in midtown for a lunch at Blue Smoke. And what did I see around the corner? Forcella. I guess that's one less river that I'll have to cross to get here next time.