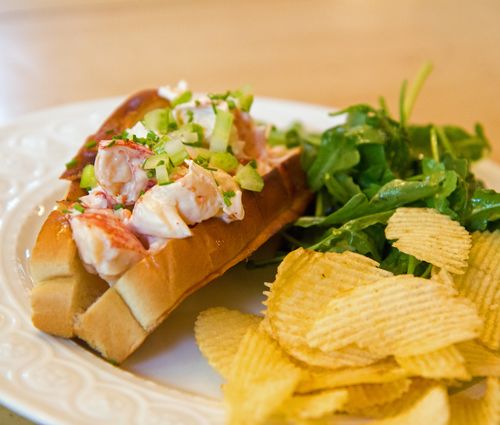 It would be kinda silly to convince anyone that I came up with a great lobster roll recipe, when there are plenty out there (largely consisting of butter or mayo), and they are all pretty much the same.

What I will offer here is the following:

If you want to make lobster rolls but don't want to cook the live lobster, you should call Peter's Fish Market in Midland Park, NJ, and have them cook as much lobster meat as you'd like. For sure, it's not cheap. I think 1 lb cost me about 50 bucks last week. But that will make 4 or 5 lobster rolls.

Of course, if you don't live anywhere near Midland Park, NJ, you might have a fish monger near you who provides the same service.

And before anyone gets on their soapbox asking why I wouldn't cook the lobster myself, with some weak argument about how the thing is going to die anyway, blah blah effing blah, well, killing animals in your kitchen may be your thing, but it's not mine. Although I might kill some clams or oysters every now and again.

The other thing I'll offer is the following:

Put lots of melted butter on those (top-split) rolls, inside and out, and toast them so they're good and warm.