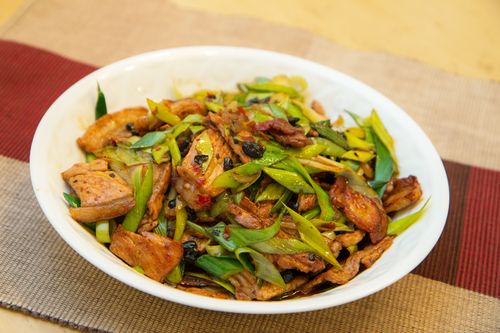 "Streaky pork." "Fatty pork." "Streaky bacon." "Bacon." I've seen pork belly described using any number of (often unappetizing) terms on Sichuan menus. It's probably just as well that these ominous depictions are sending up red flags, because the unsuspecting customer who is expecting some dry, boring morsels of pork loin might be surprised when they get a plate full of belly.

That surprised person was me about 12 years ago at Grand Sichuan on 2nd Ave and 50-something in NYC. A friend and I were having one of our standard blow-out lunches, and we ordered a pork dish. When it hit the table, we were beside ourselves. "Good God, it's a plate full of bacon!" was our reaction. We laughed about it, but enjoyed the dish as much as we could, along with the three other dishes that we ordered.

We'd continue to bring up the absurdity of that dish over the next few years, half disgusted as we recalled that plate of "bacon." And then one day it occurred to me that this plate full of fatty, luscious pork belly was actually a beautiful thing. One to be admired, not ridiculed. I'm not sure when I experienced this life-changing epiphany, but since then I've been a huge fan of any of the Sichuan dishes that use pork belly. And there are many.

One of those dishes is a standard restaurant order for us. And now, with the help of Fuchsia Dunlop's Sichuan cookbook Land of Plenty: A Treasury of Authentic Sichuan Cooking

, it's a standard at t:e headquarters.  In her book, it's called "salt-fried pork." It consists of pork belly and leeks. Lots of leeks, when I cook it. And, as it turns out, black beans and chili bean sauce, and not much else.

As with much of the Chinese food I've been cooking, it's dead simple. The fact of the matter is that you've got some incredibly flavorful ingredients doing all of the work. All you have to do is mix them together and not screw it up. No problem.

The dish is immensely addictive, and packed with intense flavors. It's a bit spicy, a bit sweet, with a somewhat salty backbone. And it's even better as left-overs the next day.

Since I don't strictly follow Ms. Dunlop's recipe, I'll go with the "adapted from" approach here (that's what you do when you want to steal someone's recipe and post it on your blog--you say "adapted from" to make yourself feel better--like I just did): 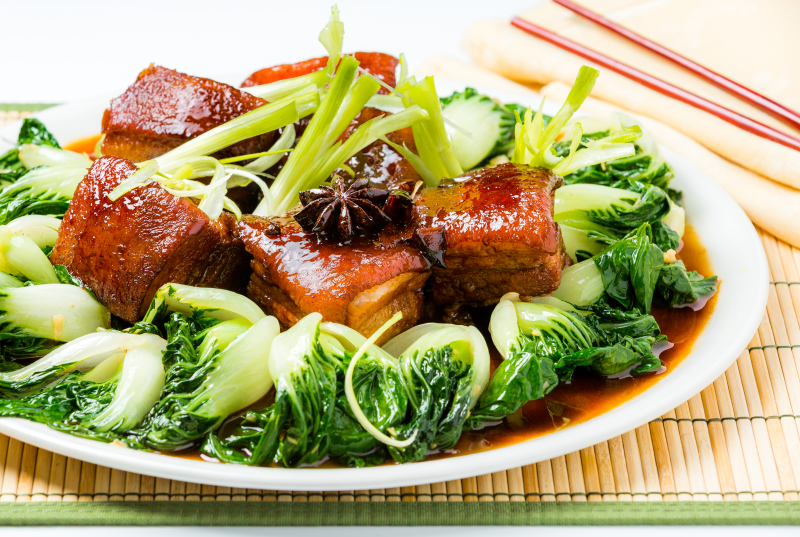 One of my first experiences with real Chinese cooking was at the highly-regarded China 46 in Ridgefield, NJ. This restaurant, which specialized in Shanghainese cooking, was knocking it out of the park during its run from 2001-2007. We had countless meals here, each more memorable than the last.

The owner, Cecil, was always very helpful in steering me in the right direction, often offering us little samples of some of the more interesting stuff. One time, as I rattled off our order of dishes, he abruptly interjected "NO! Too much MEAT."  He was right. I was ordering like a gluttonous American.

China 46 was our go-to place for big groups of friends and family. For those well-attended meals, we'd look forward to ordering a monster of a dish called Superior Ruby Pork, with a magnificent description: "A giant pork shoulder with mixed herb simmered for hours. Served very tender as melt in your mouth." I just love that. I don't recall much in the way of herb, but it was certainly flavorful, and no doubt tender as melt in your mouth. And it was red. And braised.

With little understanding of that type of cooking at the time, I had no idea what one would have to do to make this type of dish. It was mysterious. It was magical. But now, I occasionally buy and read books, and as the folks who follow this blog (and its Facebook page) may have noticed, I'm really into Chinese cooking these days. And I've been relying on books from Fuchsia Dunlop pretty much exclusively. So when I saw a recipe for "Chairman-Mao's Red-Braised Pork" in Revolutionary Chinese Cookbook: Recipes from Hunan Province

, well I just had to give it a whirl.

Ms. Dunlop was apparently nice enough to share a version of this recipe with epicurious.com, so you can view it here. It does differ a bit from the version in Revolutionary Chinese Cookbook, but I suspect the results will be very similar. Two differences are that the version from Revolutionary Chinese cookbook calls for par boiling (for 3 minutes) the pork belly, and caramelizing the sugar as the first step to create some color and flavor. I think both are probably good ideas.

This dish is incredibly easy to make and requires no special skill or equipment (other than a braising pot).  Ingredients-wise, there's the pork belly, and a few basic items that you should have in your pantry anyway: