Eating in Barcelona: Part IV: Avesta for absinthe and Hisop for lunch 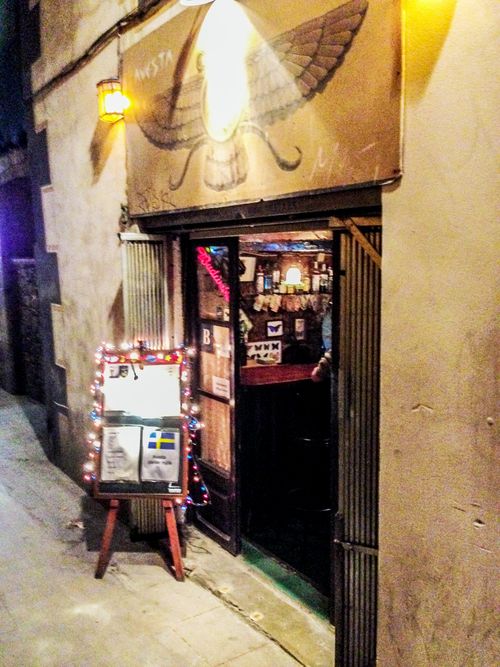 After that wonderful paella at Merendero de la Mari, we started wandering through the Gothic Quarter (Barri Gòtic), still very excited to be in day one of our visit to Barcelona. The Gothic Quarter reminded us very much of Bairro Alto in Lisbon. Stumbling onto a tiny bar, curiously playing American music from the 70s on the sound system, just as we did in Lisbon one night, reinforced that feeling.

The oddly small door to the oddly small bar called Avesta caught our eye. Well, factually, the sign out front that included the word "absinthe" caught my eye. In we went.

There was a bartender, and a single patron, watching some sort of sporting event on the TV. I didn't concern myself with the game, but inquired on the absinthe directly. I don't know much about absinthe, other than I drink it quite often in cocktails. I was advised that they carry several Spanish absinthes, and when in Rome... 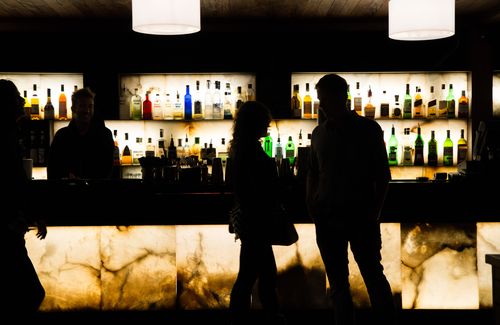 Rather than stumble through the rest of the day after our lunch at Clemen's Bar in La Boqueria, we headed back to Hotel 1898 to relax for a while. The first day of travel is always difficult, as you know. This, of course, occured before dinner, which is Part II in this series on Barcelona, so the numbers numerals here are sort of meaningless.

We had no idea the hotel had a rooftop pool/bar/deck with awesome views of the city and suitably fruity and fun cocktails. Imagine how thrilled we were to see that we wouldn't have to nap in the room, but rather on a large, comfy couch, in the sun, surrounded by drinks with straws. 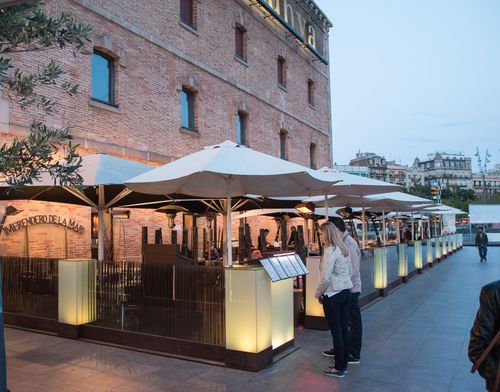 Running counter to the reality here in the states, restaurants near water or in touristy areas do not necessarily suck in Europe. Merendero de la Mari is another data point supporting this.

While it was recommended by a foodie friend, we were a bit hesitant to give it a whirl, as it is right in a marina and all, and has a huge outdoor patio, and, well, I dunno. It just seemed like a questionable choice for our first dinner. However, any reservations where unfounded. 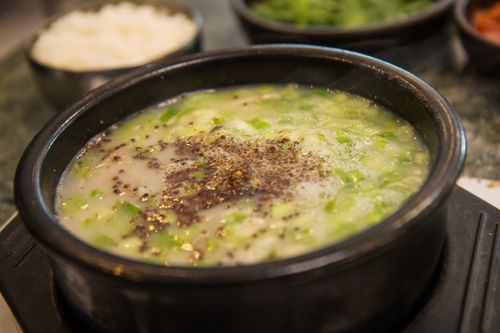 When I put out a request for a restaurant rec in Fort Lee to the nice people who follow the t:e twitter feed and Facebook page (why don't you?), I of course got some excellent feedback. Two of those maniacs suggested Korean places that specialize in soondaeguk. I must admit that I hadn't heard of this soondaeguk until then, but now I can spell it, and think I can pronounce it. What a difference 4 hours makes.

Soondae is a Korean blood sausage, and Soondaeguk is a soup with this sausage as the star. The soup also from what I understand has offal in it (liver, lung?). When this was determined, there was simply no doubt that I had to get this stuff into my body, so off I went.

Eating in Barcelona: Part I: La Boqueria and Clemen's Boqueria 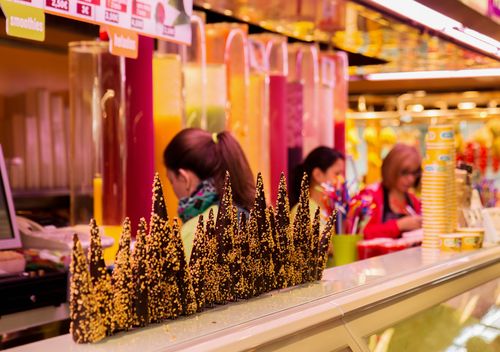 Regardless of the planning or attempted sleeping on the plane, I always arrive in Europe blearly-eyed, grumpy, and hungry. When we landed in Barcelona, and realized that our transfer service hadn't sent the car, I became even grumpier.

Thankfully the car arrived within 15 minutes after calling to inquire (and they didn't charge for the trip), and we were off to Hotel 1898 in no time, with only slightly more grump than before.

Fully expecting the room not to be ready, we planned on checking out La Boqueria, the rightfully famous market on Las Rambla, and getting something to eat. When the fella at the front desk told us that the room was in fact ready, I could have kissed him. We settled in and cleaned up a bit before heading off for our first meal of the trip. 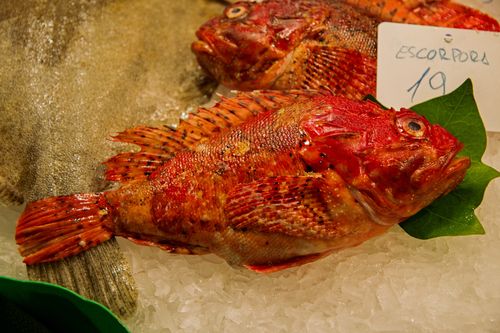 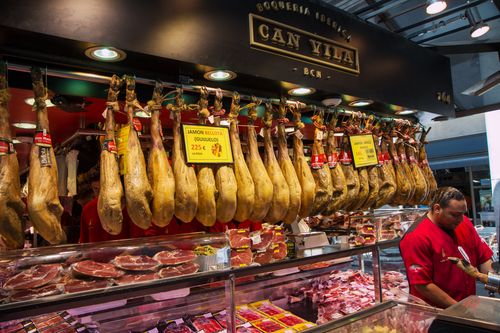 La Boqueria certainly lives up to its reputation as being a kick-ass market. The scope and size of the place overwhelms. You could shop here for every single meal of your life and never run out of options. The fish selection alone is enough to make you go googly-eyed. Add to that fruits, vegetables, meats upon meats, cured hog legs upon cured hog legs, prepared foods, and various tapas bars tucked away, and you have an experience that could keep you busy for days.

We weren't here to shop, unfortunately, so off we went to see which of the tapas bars had the least oppressive lines. Bar Central was our first stop, as it had come up in my searches quite often. It had obviously come up in others' searches as well, as people were 3 deep at the bar, waiting for seats. I wasn't about to get involved in this dance at this point in the trip, so we pressed on and ended up at Bar Clemen's, over there in the corner of the market. There was no need to queue up behind people as there were two empty stools with our names written alllllllll over them. 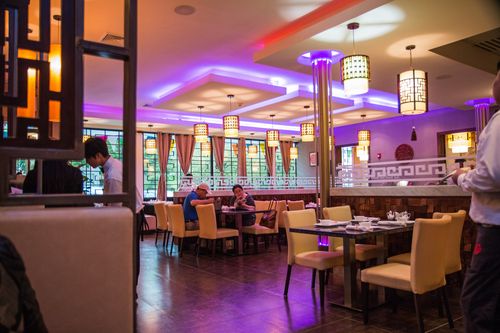 Joyce Chinese Cuisine, which is related to the similarly named and no doubt thoroughly mediocre Americanized-Chinese restaurant Joyce Chinese Restaurant in Fort Lee, opened in River Edge a few weeks ago. We stopped in for lunch a while back, only to find they hadn't started up their lunch service. We then ended up at Lotus Cafe in Hackensack for the worst meal I can recall. This won't happen again.

We made up for that bad meal at Lotus Cafe several times over with our recent dinner at Joyce. 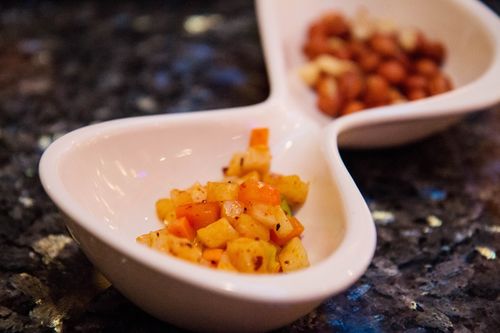 Things were off to a good start when the server brought to the table an amuse that wasn't fried wontons. A small dish of peanuts along with some pickled vegetable in chili oil. I could have made a meal from that vegetable, but there was more to explore.

The menu at Joyce certainly leans toward authentic Sichuan cooking. They do have a small section in the back for those who enjoy a proper "beef and broccoli." I appreciate the way they completely separate the good stuff from the not-good-stuff.

All of the usual suspects make an appearance here: tongue and tripe, spicy wontons, boiled fish, Chinese streaky pork, Mapo tofu, et al. Very similar in depth and breadth as most other Sichuan restaurants. Which means making a decision on a few dishes can be a challenge.

We managed to whittle down to a few choices, to get a feel for the place. First up, AH-bviously, was Tongue and Tripe.

Boy oh boy, I can sure hold a grudge.

I was an early supporter of Chakra (shit music autoplay alert), the large, square, windowless "romantic" restaurant on Route 4 in Paramus, when it opened 10 years and several owner/chefs ago. Unnnnnntil. During one visit in 2004, we finished up our dinner, and wanted to take dessert home to enjoy on the couch in front of the TV. Here's what I wrote about this back then:

"we were a bit fatigued by the end of the meal, but we wanted to take home dessert to have with some sherry on the couch. i asked the waiter if we could take home dessert, and which ones would travel for 5 minutes, and we made our decisions. he came back and said he was sorry but "the chef won't do take-out."

i asked him if he told the chef that we had dinner and ordered wine and the whole deal, and he assured me that he did but the answer was "no." he then said that if we wanted to order dessert for the table, he could then wrap anything that we didn't finish, effectively suggesting that we order it, he brings it to the table, he then brings it back and has it wrapped to go. i told him to "tell the chef that i don't want to play games." i can appreciate "rules," but this one seemed to be applied without a consideration for customer service. tsk tsk."

For some reason I begrudgingly returned two additional times, each getting worse than the previous. I didn't return to Chakra, largely based on that chef's handling of that situation, and the rest of the ensuing kitchen and management issues, for many, many years after 2004. He simply did not deserve my money or support.

Under the latest chef/owner, Thomas Ciszak, I did visit once a few years back with a large group, and more recently about a year ago solo, but wasn't compelled enough to return. I think the above transaction was still in the forefront of my mind, tainting my opinion of the place, even though it was under a different chef and management. In fact there's no denying that's the case. Not to mention the spicy margarita was much too spicy, and the tuna tartare had an unpleasant bitter flavor.

Fast forward to Chakra's recent 10 year anniversary party, when local bloggers/media and regulars were treated to a Monday night party in celebration of the dance of receiving free meals for publicity, in the case of the media/bloggers, and being regulars, in the case of the regulars--as I sat at home making Chinese food, completely not invited. Intent on tempering the water of any gushing reviews coming out of this warm oil massage of an event, Chakra went back on my list.

More importantly, a few people whose opinions I trust are regulars and tell me that they're really, truly, doing a good job at Chakra, even when you have to pay for the food. Based on this recent visit, I can largely agree, with the exception of a few missteps.

But first, a cocktail.