The Franklin Bar: cocktailing in Philly 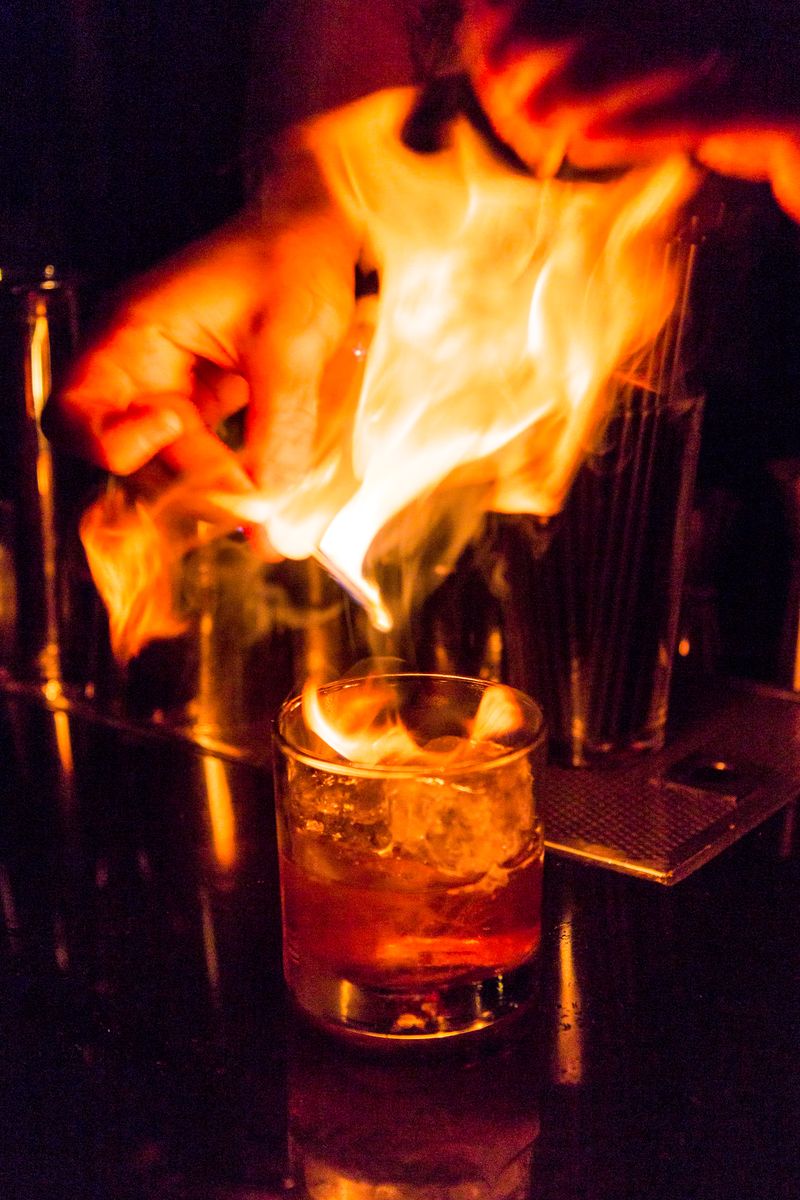 Are they transitioning the name from "Franklin Mortgage and Investment Co." to "The Franklin Bar?" Let's bloody well hope so. I am into the brevity thing. "The Franklin Bar" suits me just fine.

And The Franklin Bar suits me just fine. A speakeasy-style cocktail bar set in a candle-lit basement, you sure wouldn't know anything of note is behind that nondescript black door unless someone told you (or you read about it). Luckily for me, during a dinner at Village Whiskey, the bartender suggested I give the place a try. For some reason he must have gotten the impression that I like cocktails. And since it was on the way back to the hotel, stumbling distance even, well you just know I had to check it out. A good piece of advice from this bartender to be sure.

Franklin Bar (the downstairs bar, not the new, upstairs bar) lets only a certain number of people in the place at a time. This isn't due to an occupancy limit set by the city, but rather because they don't allow people to stand. You will sit, you will enjoy your cocktails, and you will behave. I think you have to ring the doorbell when you get there, although on a recent visit two gentlemen were minding the door. "Have you been here before?" "Yes" is always the correct response. 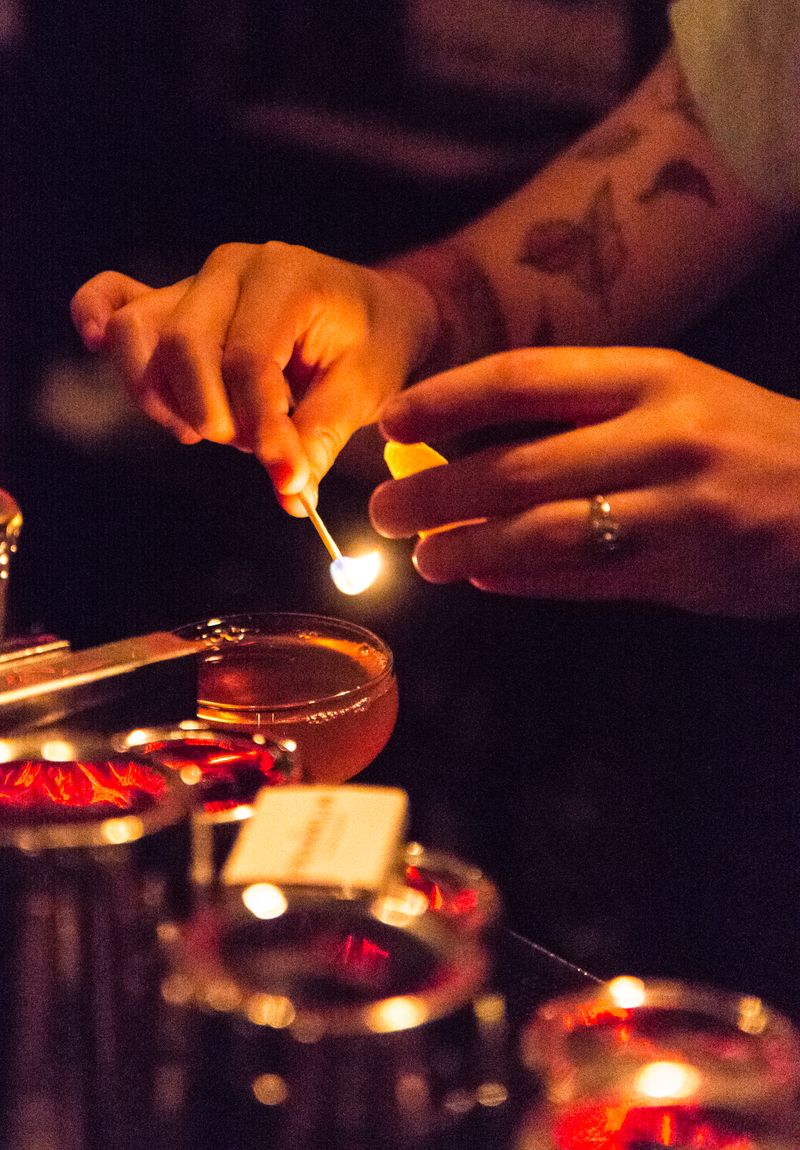 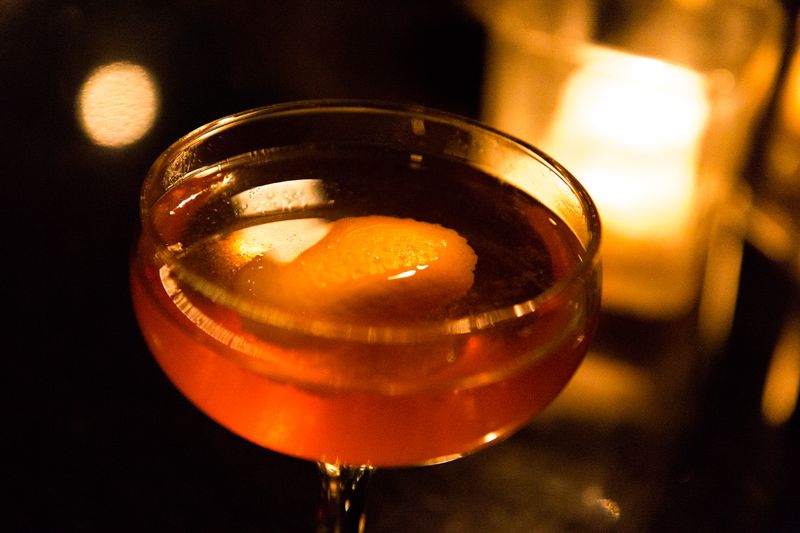 Perhaps I'm exaggerating the rigidness of the experience at Franklin Bar.  Compared to some newcomers like Hop Sing Laundromat, which by all reports is known for being a bit over-the-top with its rulebook--No sneakers? No shorts? A "screening process" to get in?--getting into and enjoying Franklin Bar is a relatively relaxed affair.

Don't go in expecting to sit at a proper bar. The bar (downstairs) seats about 4 people IIRC. You'll be at tables or perhaps the bar rail. It turned out I was alone during my first visit, so they were able to seat me at that tiny bar. I bellied up and dug right into the cocktail list. 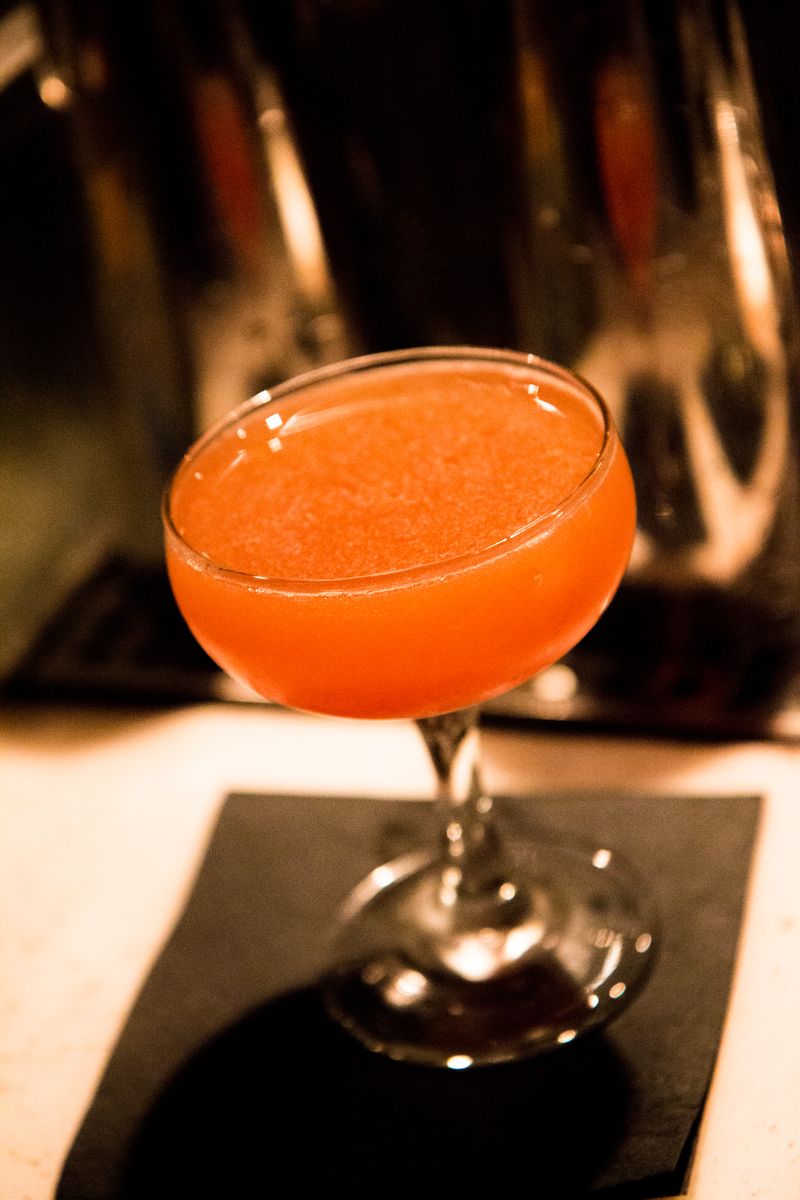 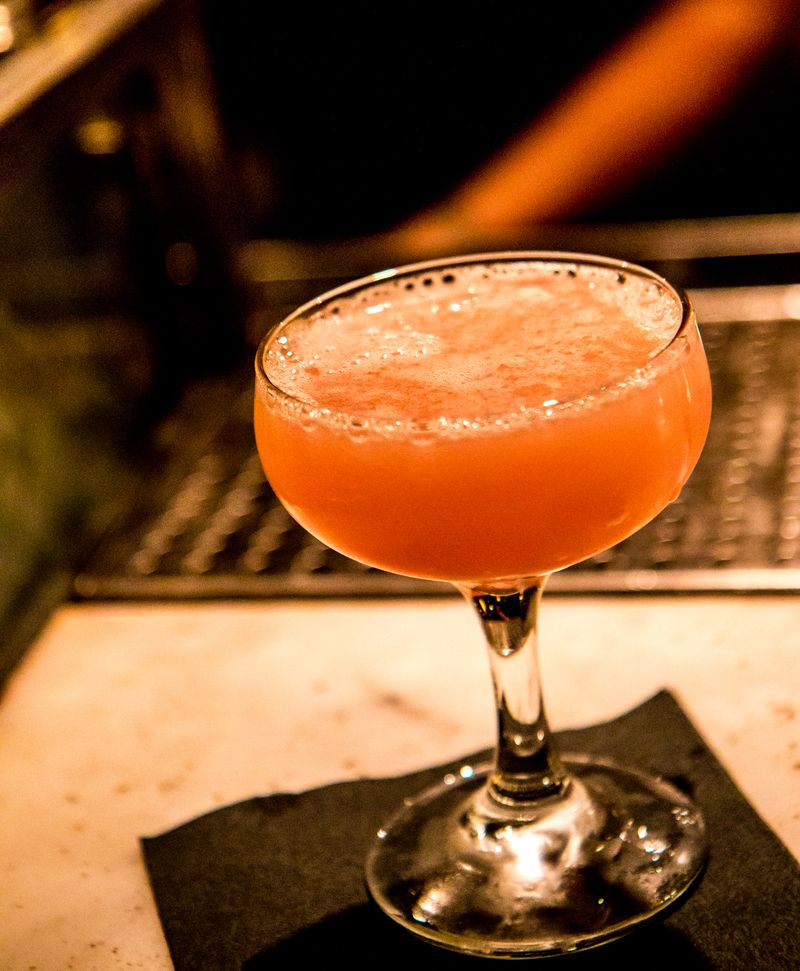 I was hoping to get into some light discussion on cocktails with the bartenders, given my ideal position at the end of the bar. But, alas, they were way too busy. At least two bartenders that night, making their craft cocktails non-stop. These are not simple cocktails. They're messing with the right ice, flaming peels, splashing bitters and tinctures, garnishing with foods, frothing with egg whites, shaking aggressively, tattoos rendering to nothing more than a fleshy blur.

Posted at 10:20 AM in Cocktails, Just over the Jersey border, Philadelphia, Travel | Permalink | Comments (2)

Eating in Philadelphia: Parc and oysters and white wine There was no doubt about it. I knew Parc (shit music autoplay alert!) was a completely uninspired choice for a meal, especially given Philadelphia's phenomenal food scene. But, it was our first afternoon in Philadelphia, we had just rolled into town, it was a beautiful day, we wanted to sit outside, the idea of a seafood tower was appealing, and we were staying in the Rittenhouse Square area. Given this set of circumstances, Parc seemed as good a choice as any.

Thinking about it, I can't recall a time that we've been in Philly and not stopped into Parc. Typically for a drink and to take a load off.  A lively and large Parisian-style bistro, outdoor seating for as far as the eye can see, with a great view of Rittenhouse Square, there's much to draw your attention to this Stephen Starr restaurant. As much as I try to avoid Starr restaurants, as to my mind they are cookie-cutter contrived affairs--and some are--, they tend to be well-run and can be quite decent. Parc seems to be no exception in this regard.

With no seats available outside, the hostess took my cell number and said she'd text when one opened up. Perfect. We went next door to Devon Seafood Grill, which I have come to learn is a small chain, to have a drink. I've had some food and drinks here in the past, and thought it was just fine for what it is. Anyway, before we could order a drink the text came in from Parc, so back we went to claim our spot facing Rittenhouse Square.

This is riveting stuff here, I know. I'll get on with it.

Posted at 09:41 AM in Cocktails, Just over the Jersey border, Philadelphia, Travel | Permalink | Comments (0) 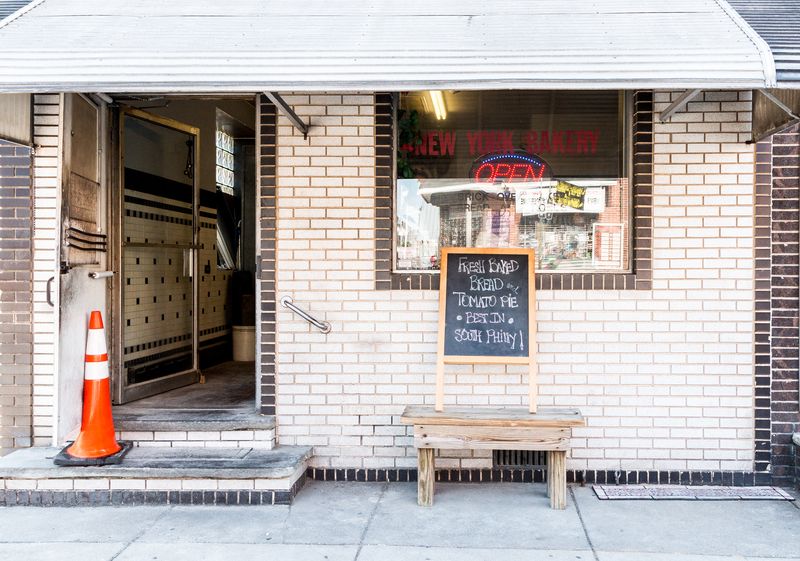 On our way out of Philadelphia, we stopped at New York Italian Style Bakery to get a few slices of tomato pie. I knew I was going to try a slice when I got in the car. I didn't think I'd be eating two in quick succession. Maybe the excitement stemmed from this being my first experience with tomato pie (a style of pizza that seems to be unique to Philadelphia and its suburbs), but this pie really made an impression on me. 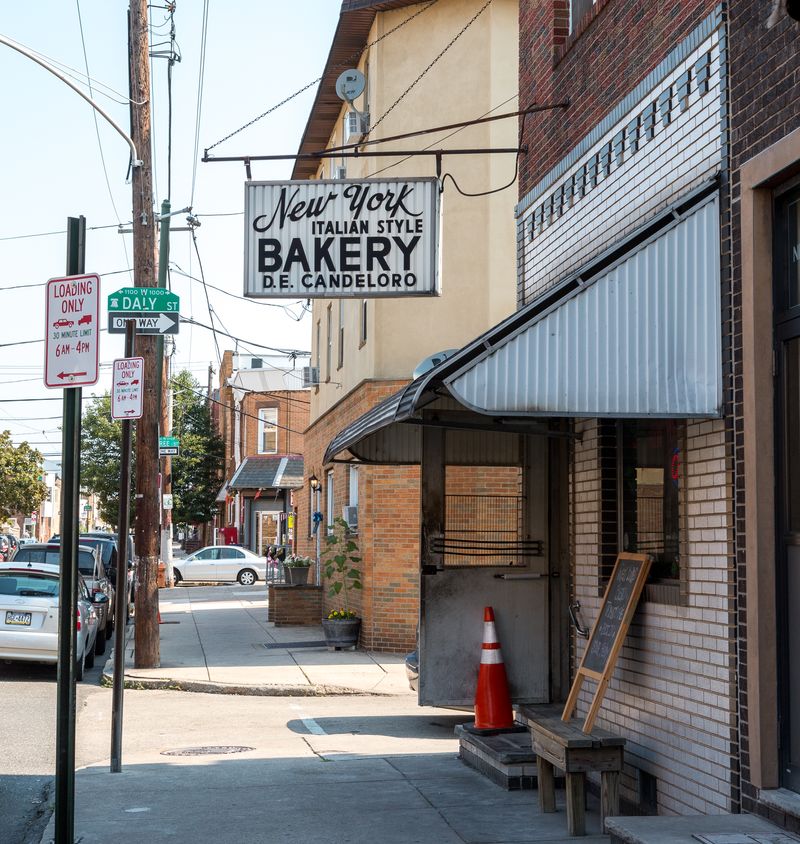 We would have never considered this stop or knew about New York Italian Style Bakery if not for a conversation with a lovely bartender at the pretty-damed-good Lolita during lunch one afternoon. We got to talking about food, as I do, and she recommended this small bakery that makes bread, and also this tomato pie. "Just get a few slices and bring them back to the hotel for later tonight," we were advised. That sounded like a fine idea, but once I saw they open at 6 am on Sunday, stopping on the way home seemed like an even better idea. Now I can't imagine visiting Philly without incorporating this stop into the itinerary. 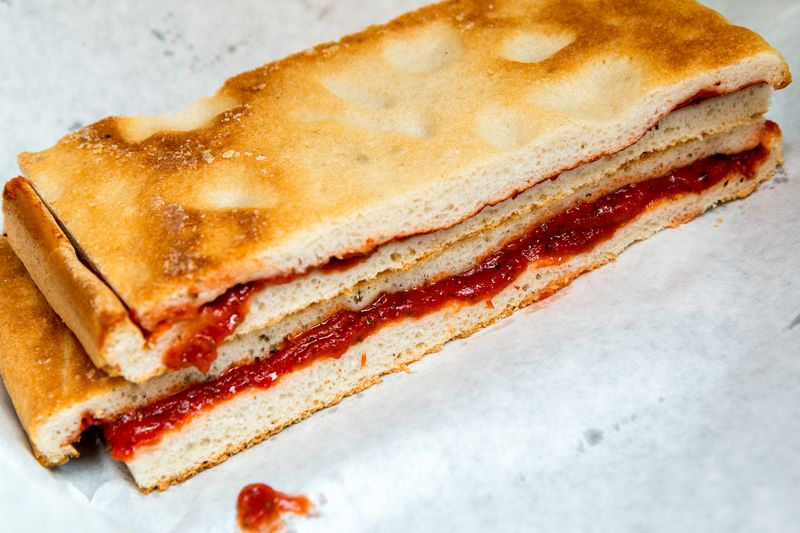 They are giving this stuff away. A slice (about 6 inches in length) is about $1.50. We got four, and the pleasant girl dutifully laid two slices together, sauce side to sauce side. The other two packed into the paper the same way, perfect for taking this stuff to go. Indeed, there is nowhere to sit at New York Italian Bakery. It's a strictly to-go operation. And don't expect a hot slice from the oven. It seems that this pizza is served room temp. 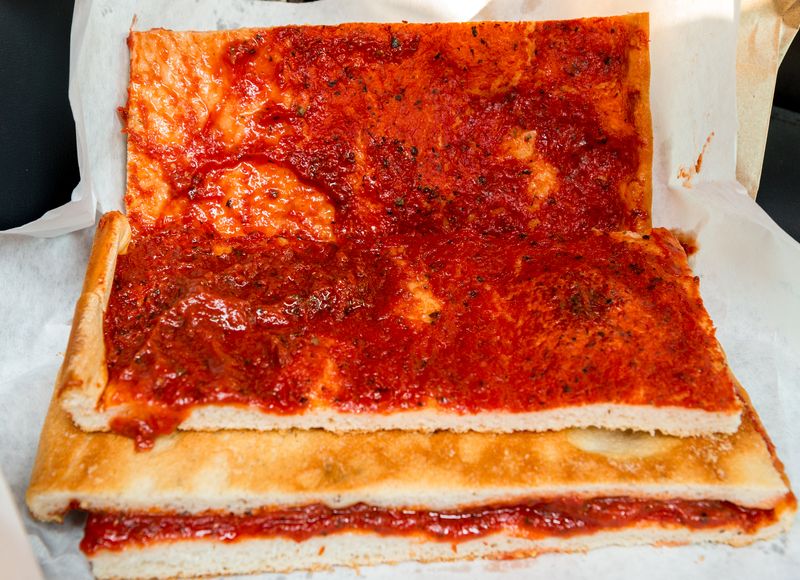 I tried a slice as soon as we got into the car (well, soon after I laid the slices on the backseat and snapped a few shots). Frankly I couldn't believe how much I enjoyed that first slice. As we were making our way to the Turnpike, I couldn't get it out of my head. I finally caved and had to grab a second slice. It was, just as good as the first. 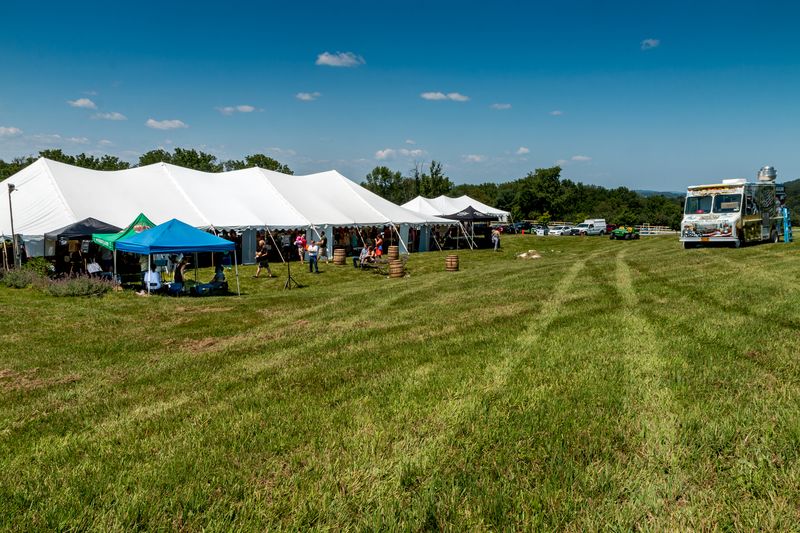 It was a beautiful day, and the idea of trying some cider and wine and gin at Warwick Valley Winery & Distillery seemed like the most perfect way to spend an hour. After a great lunch at The Grange, we headed on over to the winery.

As we pulled in, there were a few parking guys who asked "Are you here for the [inaudible to me] or the winery." Well, I was there for the winery, so that's what I said. I figured the inaudible part was a wedding or something. "Just park over there then." As I started pulling away, the missus turns to me and says "distillery event?"

"Wait, what?!?!?!?!" I threw the car into reverse and backed right the hell up. I got so excited I'm not even sure I looked in the rear-view mirror.

It's a good thing my wife's ears work better than mine, or we would have completely missed the first Straight Up New York Craft Spirits Festival.  And this was an event not to be missed (although you probably did). Indeed, even a more perfect way to spend an hour (or two) than the cider-wine-gin thing I was looking forward to at the winery. 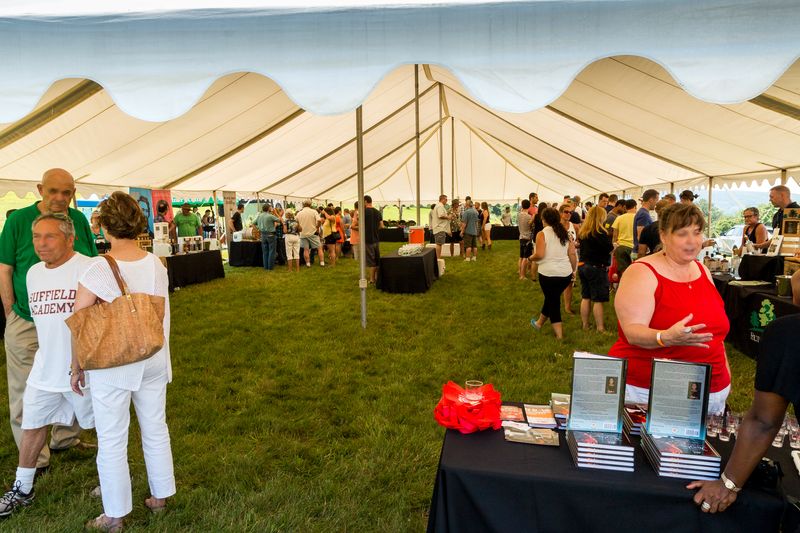 We paid the admission fee ($40), got our little glasses, and entered the tent. Distillers lined both sides, as far as the eye could see (probably an exaggeration--in addition to my ears, my eyes suck, too). We were giddy. 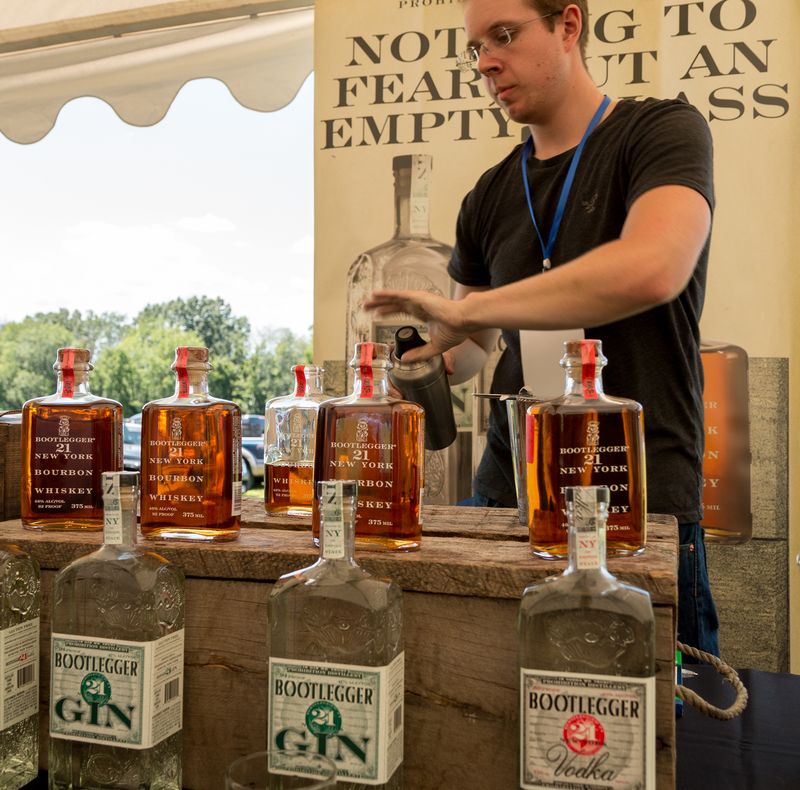 Update (2017/7): Novo had been sold and closed. A bit loss for Ridgewood's dining scene.

North Jersey has no shortage of restaurants focusing on what might be considered "Mediterranean cuisine." Ridgewood alone boasts several, ranging from good (Lisa's Mediterranean and Mediterraneo), to cookie-cutter (casually glances at It's Greek To Me). So when I saw another restaurant billing itself as "Mediterranean" was opening on Chestnut Street, I wasn't overcome with anticipation. In fact, I was only vaguely interested in the prospect. I'm here to tell you that I was a moron.

After my first meal at Novo Mediterranean, I proclaimed it "excellent," "one of the most exciting new restaurants in the area," and noted that it "has potential to become a favorite."

After the next meal I upped the ante, stating "Chef Kahlon is a stone cold killer," and "serious effing business here."  It took me a while, but I am no longer (as much of) a moron. Novo is, indeed, irrefutably, one of the most exciting new restaurants to hit North Jersey in a long time. After three meals it is, without a doubt, a favorite. I cannot imagine ever tiring of Chef Kahlon's cooking--although his dashing good-looks are starting to grate on me.

I should talk about the food. 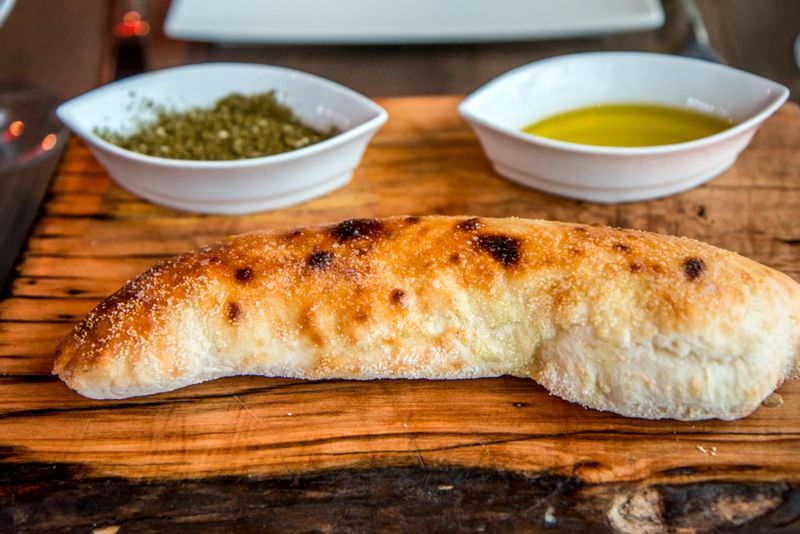 The first thing that hit our table was a loaf of house-made bread. A steaming log of olive oil coated, airy bread, sprinkled with sea salt. The bread alone is reason to return. I can't imagine how good a sandwich made with this stuff would be. Throw some ham in there and call it a day. If at the moment that bread hits the table you don't realize that you're in the hands of an excellent chef, you'll only have consider the punch of flavor packed into house-made za'atar to be convinced. I couldn't figure out what was in it, and I don't care; some things are too good to ponder.

I'm bloviating enough as it is, and I know you people have a very short attention span, so I'll just move on to some photos and brief comments. 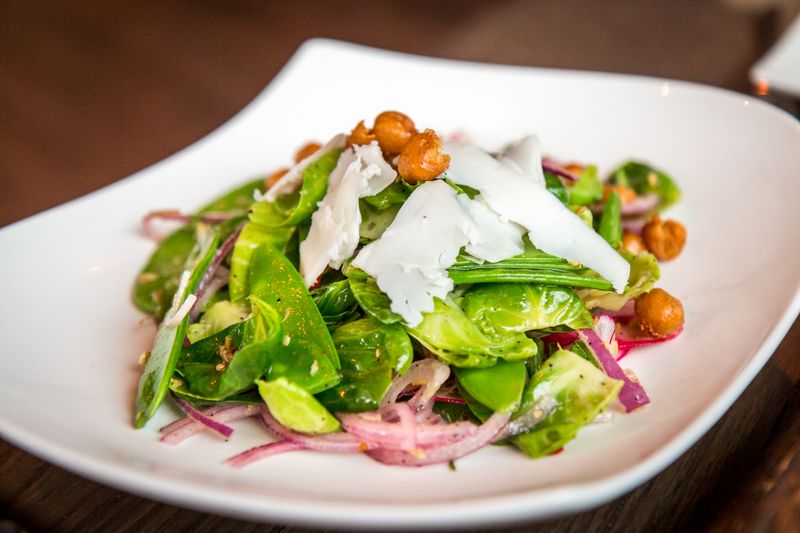 This salad was popping-bright, with crunchy, fresh vegetables, appropriately dressed, and adorned with fried chickpeas and shaved cheese. This dish may very well encapsulate Chef Kahlon's approach to cooking. Lots of exciting acid, herbs, fresh ingredients, and textural contrast. He cooks like I like to eat. 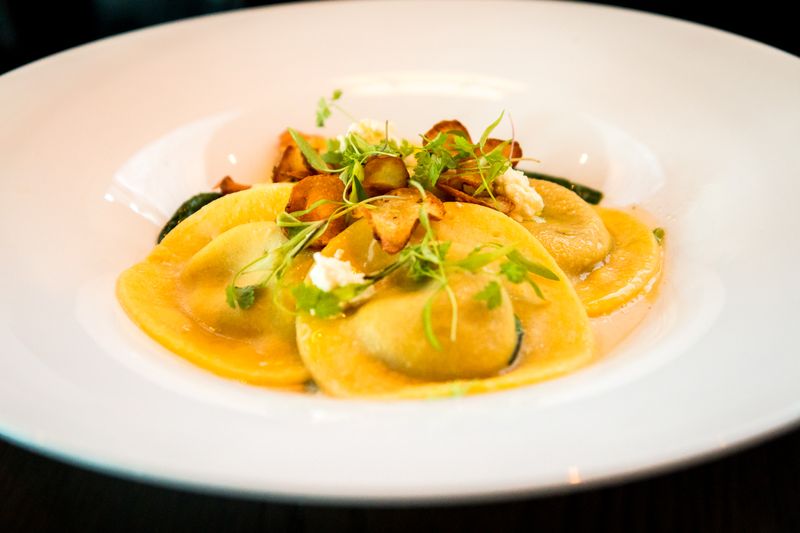