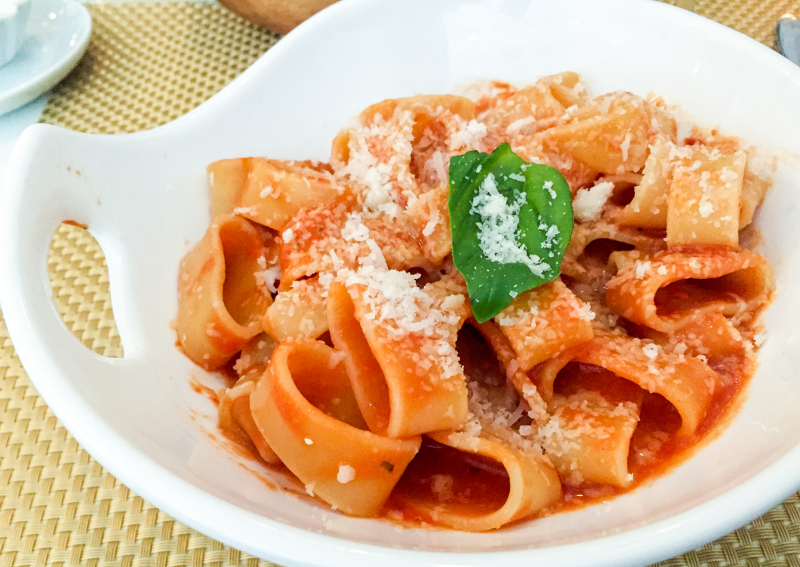 There's a little gem of a restaurant tucked away on E. Ridgewood Ave in Ridgewood. With its limited menu and lack of the typical Italian-American treats, From Scratch might not be for everyone. But if you are interested in Italian cooking influenced by the cooking of that country, you will probably enjoy the place. Judging by the crowds and hard-to-get reservations, plenty of people already "get it."

I could have very well been sitting in Italy the other day, as I enjoyed my lunch, with the sounds of the Italian language in the background (the owners are from Rome). The waitress that day was also from Italy. Near Napoli, as it turned out. More importantly than where she's from is that she convinced me to order an Italian soft drink. 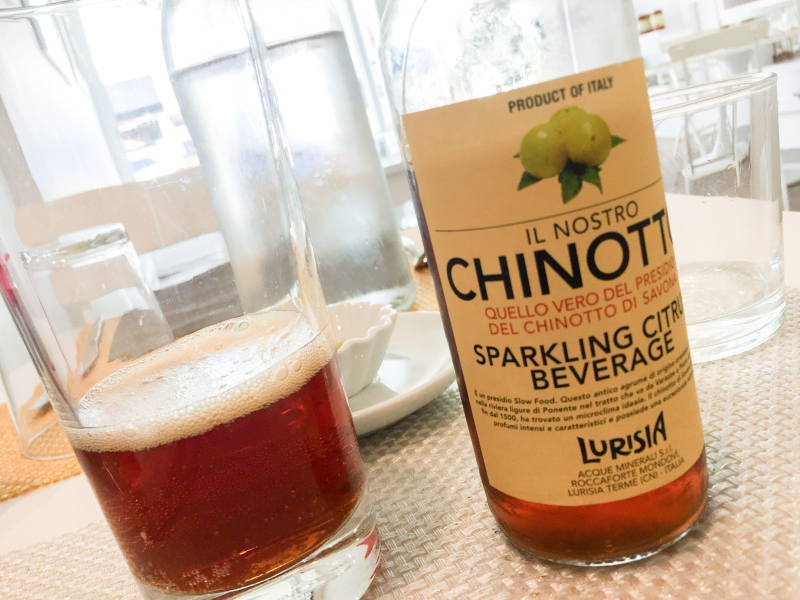 Typically I'll drink only wine or beer or water with food, but as she described this drink as being made with bitter orange, my interest was piqued. I'm sure glad I gave this stuff a try. Contrasted with the one-note sweet glop the passes as soda in the US, the Italian version is much more dynamic, much more interesting, and much more delicious. This stuff is agrodolce (bittersweet, as you know). It tasted not much unlike an Americano, a cocktail which I routinely drink like it's my job (equal parts sweet vermouth and Campari, topped with sparkling water and served with a slice of orange). It's made by Lurisia and called Chinotto. 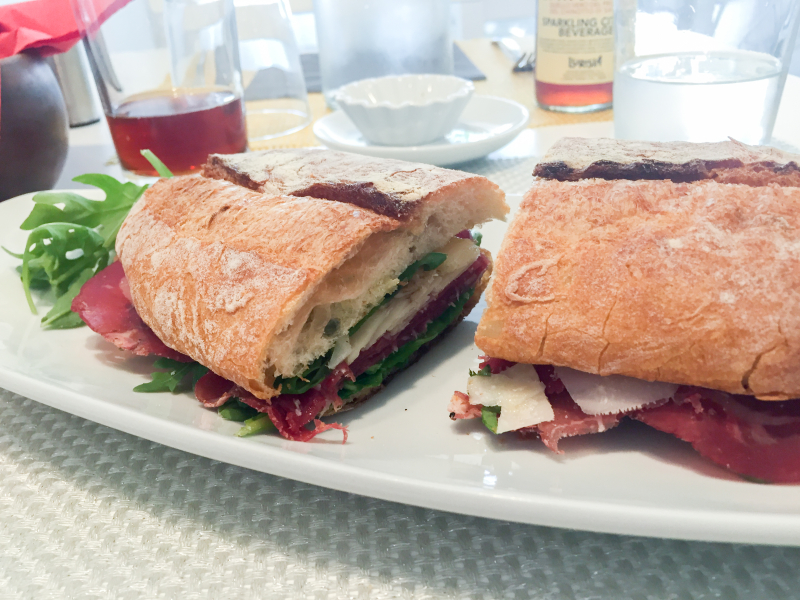 Oh the food you wonder? I had a wonderful panino with bresaola, parmesan (sliced by knife), arugula, and a touch of dressing. This is a perfectly balanced sandwich with quality ingredients. Contrasted with typical sandwiches, which too often consist of too-much mediocre bread, and too many bland fillings.  This sandwich packed all sorts of flavor and texture, all with being a sensible (to my mind) size. White Maple Cafe opened without me realizing it. I happened to be walking by one day, after a fine meal at from scratch, and there it was. A good-looking restaurant with an interesting menu. Who knew?

I popped in for a quick lunch the other day to see what was going on. I liked what I saw and enjoyed what I had, for the most part. 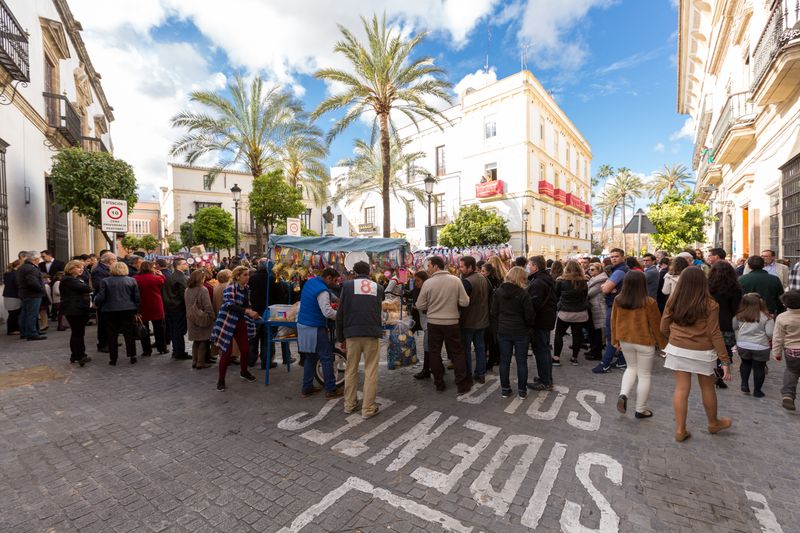 Our little plaza was transformed early in the day

The amazing processions of Holy Week were really closing in on us by our third day in Jerez. The quiet little plaza across from the hotel was transformed by a lively crowd of people and several processions the entire day. It's a wonderful sight, but trying to find a place for a drink or meal became next to impossible. 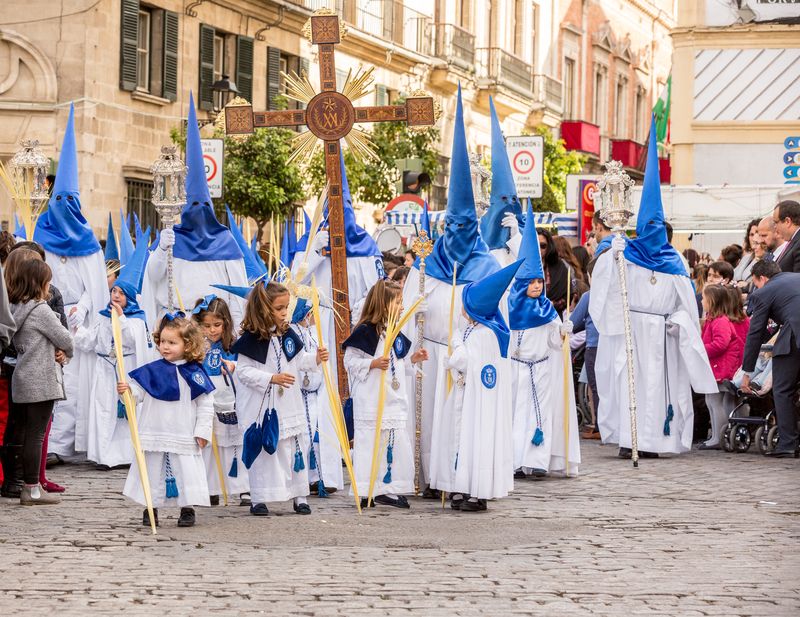 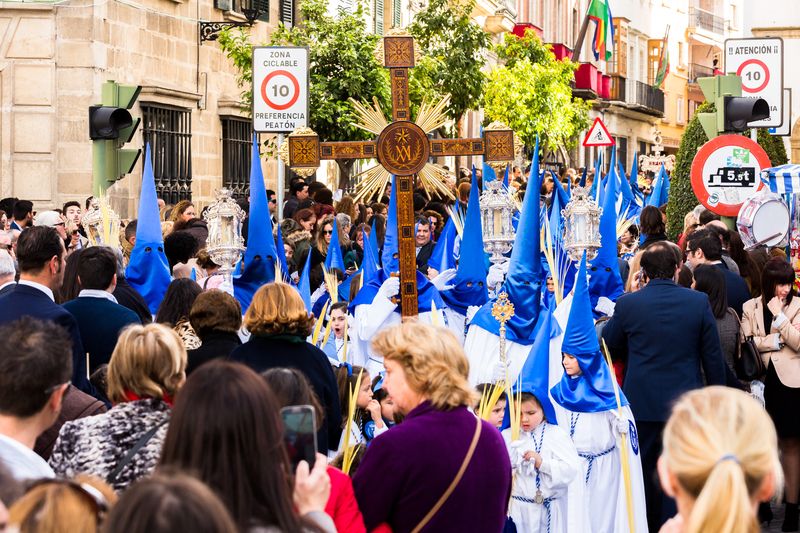 So I did some quick searching on my phone and found a restaurant a bit out-of-the-way. After taking in the processions for a few hours, off we went, against the massive flow of people to get dinner. 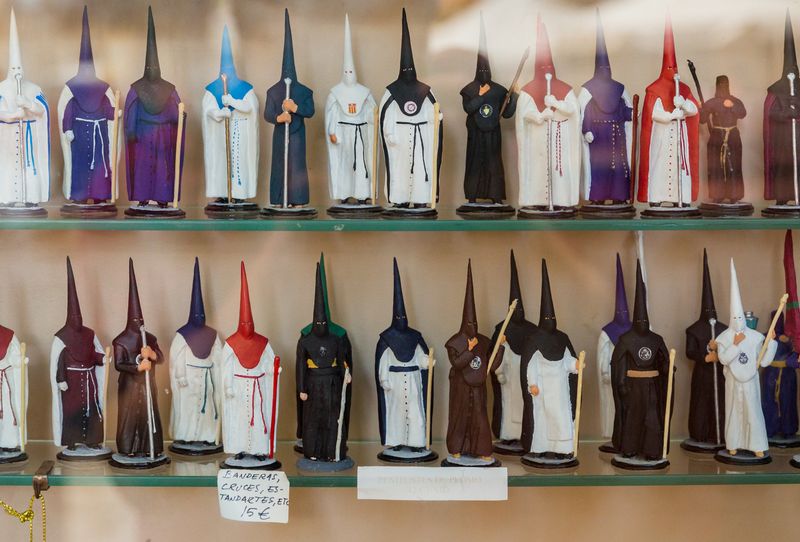 Figurines for Holy Week, which was in full swing during our trip

If Restaurante Albores was our favorite restaurant in Jerez, then the race ended in a photo finish with La Cruz Blanca a very close second. Who am I kidding. They're both equally exceptional and I'd never get tired of sitting and eating at either.

La Cruz Blanca, which is about 3 doors down from Albores, also serves traditional Spanish food and dishes with a modern twists. It's a stunning restaurant (as is Albores). We mostly stuck to classics for this meal, and it's the meal where we first enjoyed seafood with black rice. 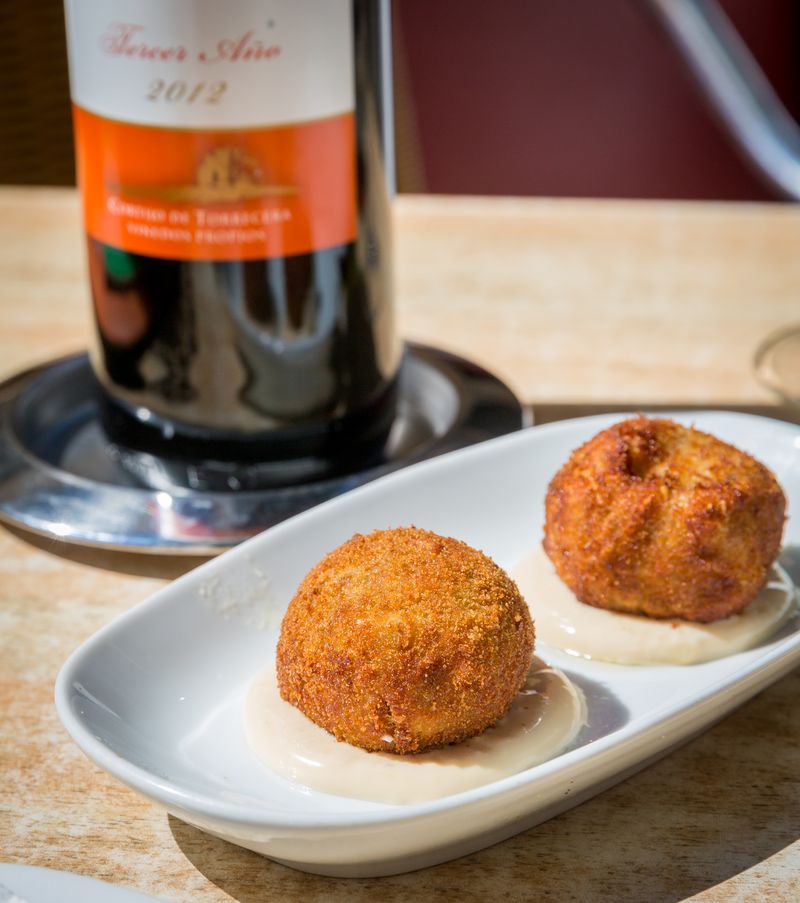 But first, as usual, croquettes.

Again I don't recall if these were fish-based, had leeks, who knows. These places do have a way with croquettes no matter what the ingredients. Creamy and dreamy. We were addicted. 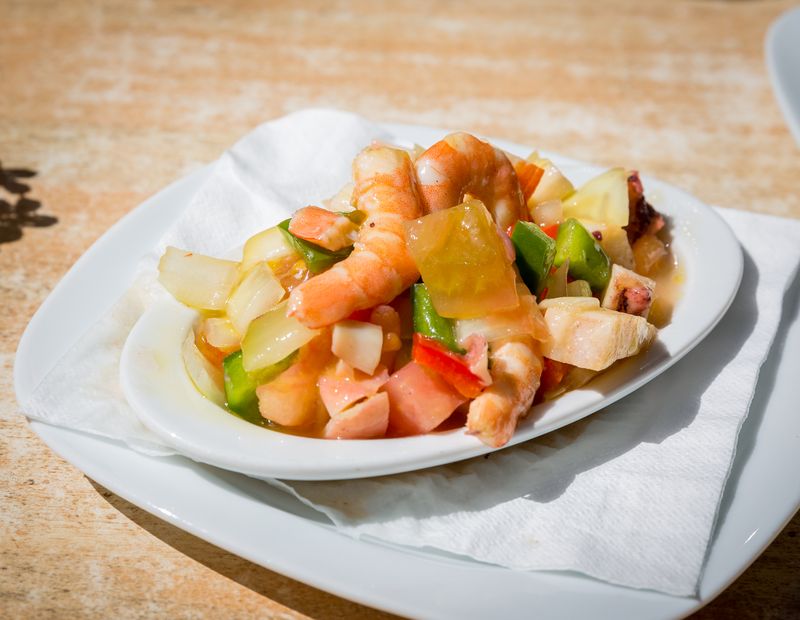 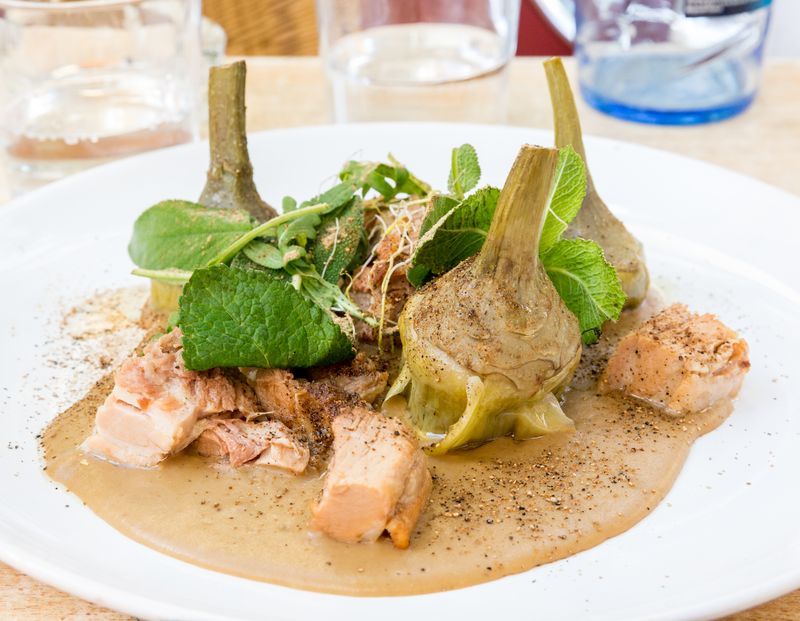 One of the specials that afternoon included a dish of pork belly and artichokes. I believe it could have been with a foie gras cream. You're kidding, right? We obviously had to order this dish, and were very pleased that we did. Blasted with black pepper and mint. Jeez that was good. 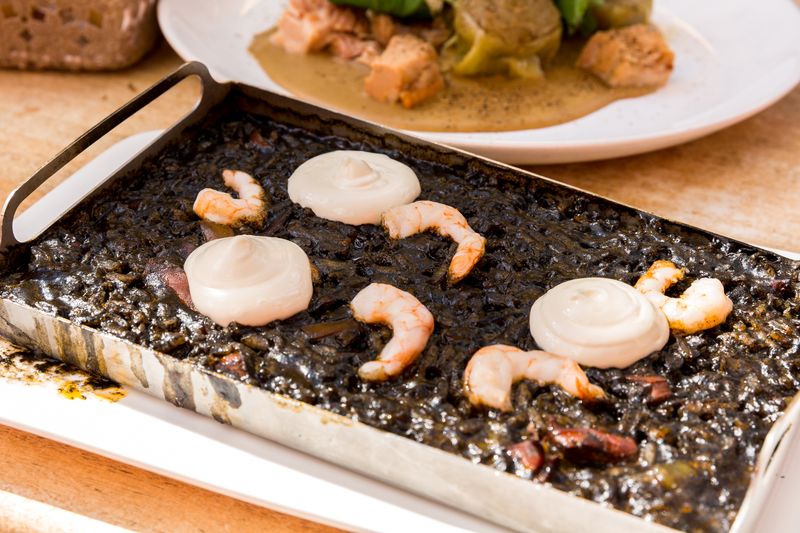 And then the seafood in black rice. When we ordered it the server warned that it would take 20 minutes to prepare. So you mean we have to sit here at our outdoor table with the blue skies and sun of Jerez over us and sip wine and watch the world go by for 20 minutes? I think we're up to the task.

This was certainly one of the top ten dishes of the trip, and probably will end up in the top ten dishes that I'll end up eating all year. I just finished lunch yet as I'm typing this and my stomach started growling just thinking of it. And my heart hurts because I would like very much to be in Jerez. Jerez, I think, was our favorite stop on this trip (which included the beautiful Sevilla and the magical town of Rhonda). 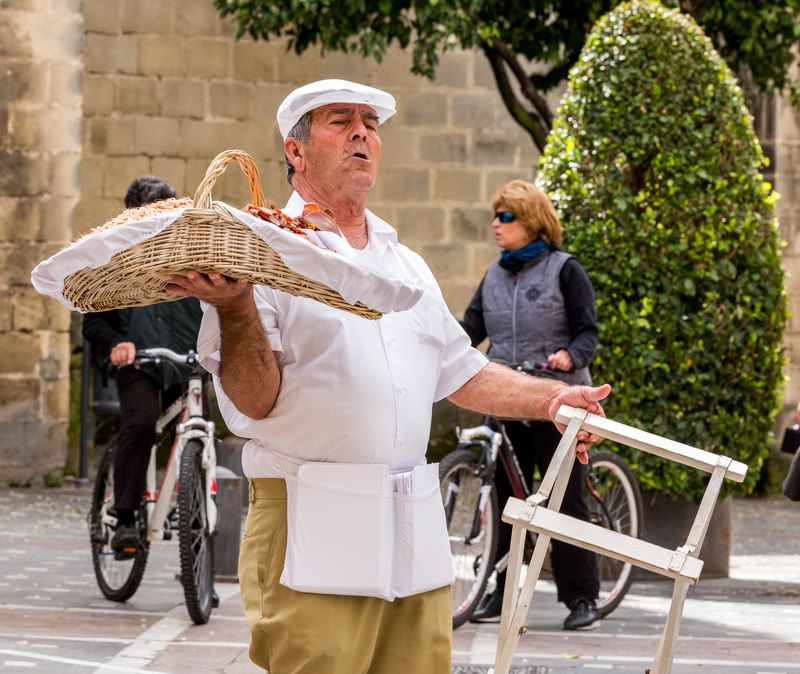 After lunch we found a seat at another restaurant on nearby Plaza Plateros where we enjoyed a few glasses of vermouth, as we did pretty much every afternoon. Just sitting around, watching the people stroll by, under the sun, is a pastime that we enjoyed thoroughly. The locals are colorful. Everyone seems to be in a wonderful mood. And you have a chance to see vendors on foot, who sell cones filled with tiny dried shrimp or meat. Yes, tiny dried shrimp, served in a cone, on the street. How awesome is that.

Calgon, take me away. 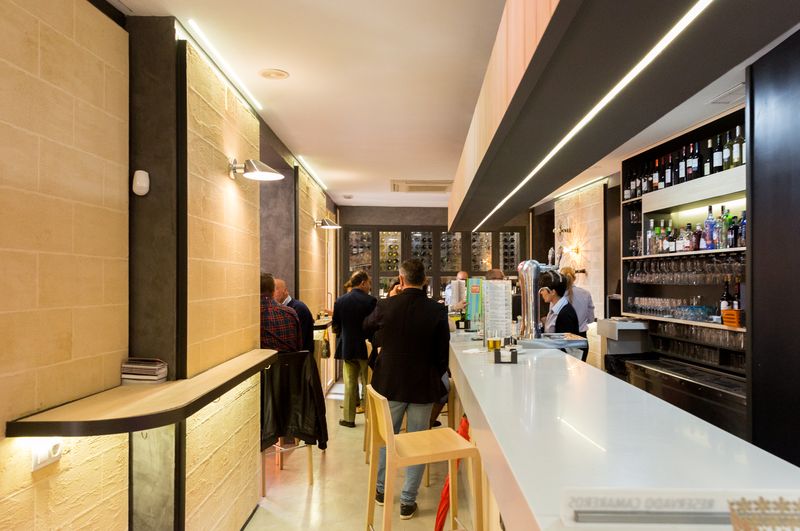 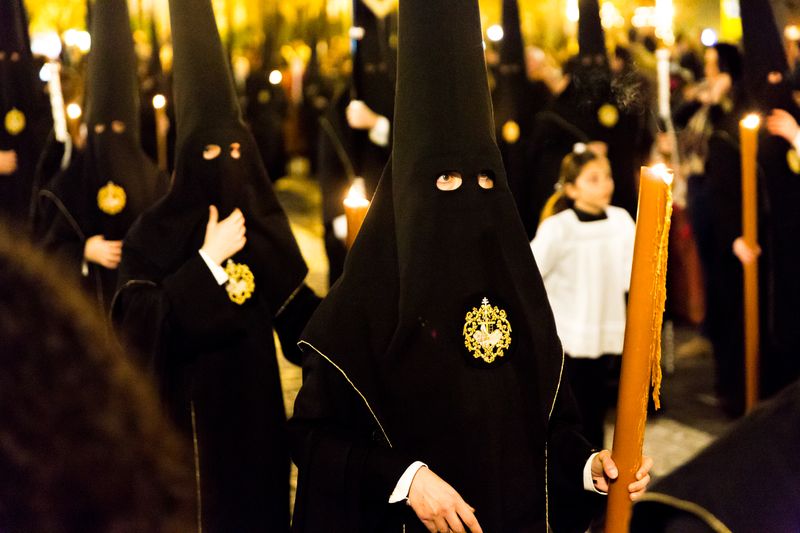 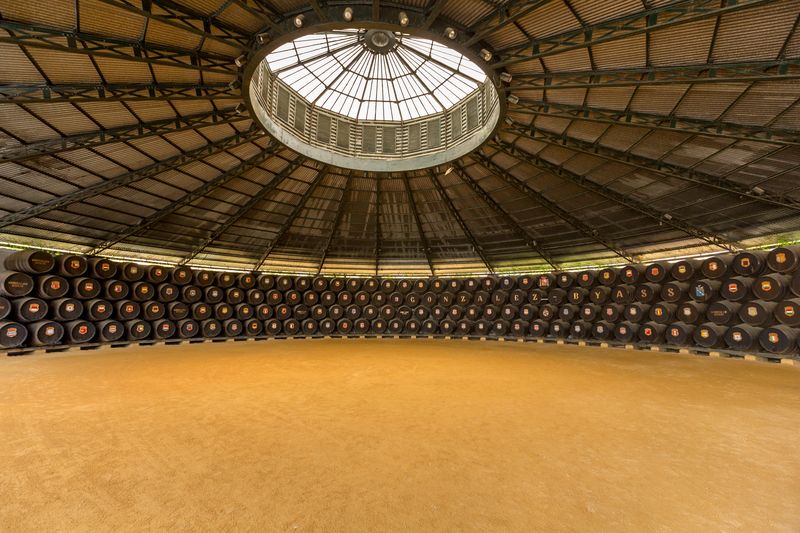 The fact of the matter is that sometimes the food isn't the only important thing.

Case in point: La Concha I (not II) in Jerez, Spain. (Please note, I'm not sure this is the name of the place. I know where it is, and I could bring you there if we were both in the neighborhood, but figuring out the name has been a challenge)

We had left Sevilla that morning, picked up our rental car, drove the quick hour to Jerez, had a hard time finding our hotel because roads were closed due to Holy Week (more on Holy Week later), found our hotel, dragged our bags up two flights of stairs, brushed our teeth (as you should), found the nearest plaza for a cold Cruzcampo (which this article claims is the "worst beer in the world"--note to writers: if you're from the US and you find yourself in southern Spain, you'll enjoy it, unless you're an ungrateful heathen), and made our way over to Gonzalez Byass, the sherry producer, for an (interesting) hour tour. After the tour, we were dead hungry, and hadn't done any research on Jerez. I even had no idea how large or small the town is (it's quite small), which is odd for me, since I typically, but not this time, study maps incessantly before visiting a strange place. 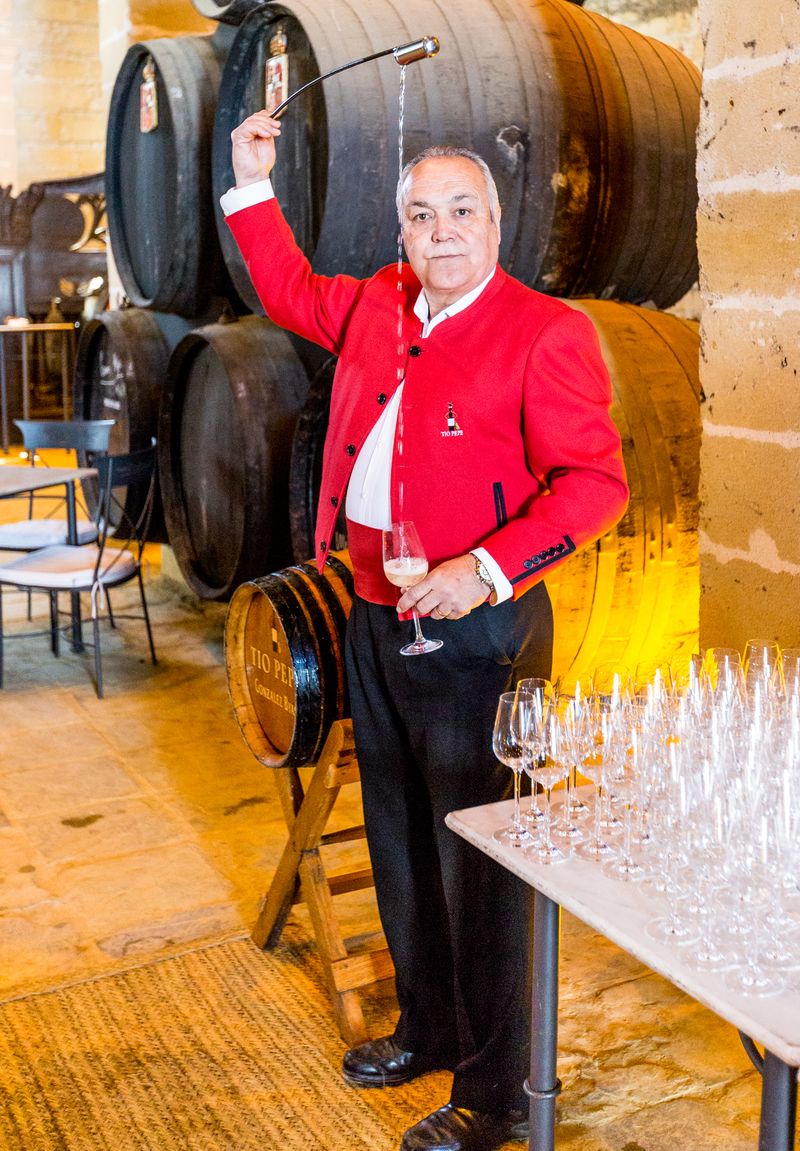 One of those sherry guys at Gonzalez Bypass. Pride. Tradition.